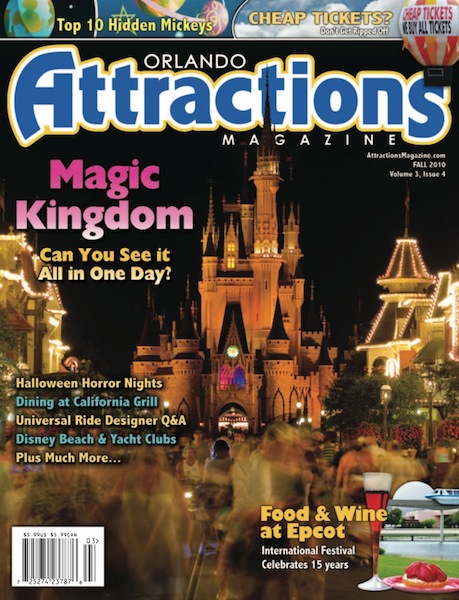 The Fall 2010 issue of Orlando Attractions Magazine is now available to order. The magazine is at the printer and will be shipping out within the next week or two. Look for it in our iPad app soon, and in major bookstores nationwide sometime in October. Subscribers should receive their copy within the next four weeks. Here’s a look at some of the stories inside.

• Our cover picture shows people rushing around Main Street U.S.A. at Disney’s Magic Kingdom. You’d be in a rush as well if you were trying to see everything the park has to offer in just one day. Inside the Fall issue, you’ll read one man’s tale of doing just that. In fact, he’s trying to break a record.

• You see signs and balloons all down the streets around Orlando’s tourist areas, “cheap tickets“, “We buy all tickets”, Disney World for $40″. But buyer beware. We’ll let you know how to avoid getting ripped-off.

• It’s the 20th year for Halloween Horror Nights. We take a look back at past years, and find out what’s happening to celebrate 20 years of fear.

• It’s that time of the year again – a fan favorite at Epcot. Still going strong, we take a look at Epcot’s International Food & Wine Festival.

• Read our questions and answers from the designer of two of the best dark rides in the world – The Amazing Adventures of Spider-Man and Harry Potter and the Forbidden Journey.

• Everyone had their favorite Hidden Mickeys at Walt Disney World. In this issue, Skipper Ben not only tells you his Top 10, but shows you where to find them.

• Plus all your favorite regular features such as the Work in Progress photo gallery, Photo Finds, your Feedback, cartoons, games, Out of the Loop, Vacation Planner, Versus and more.

Click Here to preorder your copy of the Fall 2010 issue.

wow, this is going to be a great issue! When can subscribers expect to get it?

Thanks Nick. Look for it sometime within the next four weeks. Hopefully sooner than later, but you never know with the post office.

American Idol winner will be 'Going to...