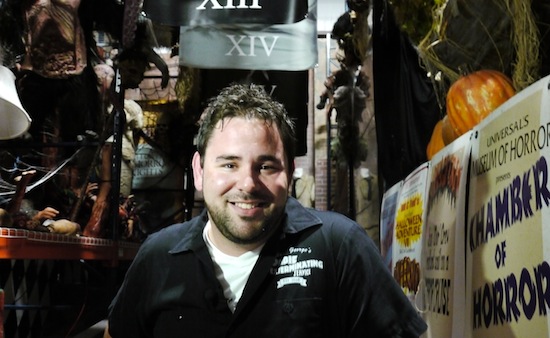 We recently had a chance to tour the “Horror Nights: The Hallow’d Past” haunted house and talk with Universal Orlando Show Director Mike Aiello about this year’s Halloween Horror Nights. Our full story is in the Fall 2010 issue. But we were able to have some of our reader’s questions answered and have Mike give us some further details on all the haunted houses and scare zones this year.

This is the 20th year for the PG-13 Halloween Horror Nights. This year’s event will feature eight new houses, six scare zones and two shows. From inside the “Horror Nights: The Hallow’d Past” house, here’s Mike’s description of all the houses and scare zones including some brand new details:

We asked our readers to submit their questions for Mike via our Twitter and Facebook pages. Here’s what we were able to find out from Mike and other Universal officials.

What is the storyline of HHN XX and who is the main character?
– Michael Bratsch
A new character called Fear is the icon. He is and has been in control of all the past Halloween Horror Nights icons.

What characters will be in the HHN: 20 Years of Fear scare zone?
-Cian Arnold
Watch the video above for more about that scare zone and all the others.

Will there be any separation of atmosphere and gore for those who may love one over the other, or will it all be gore-infused?
-Audrey Brown
Some of the houses will be less gory than others and in general, the scare zones are less gory.

Why are the Thursday and Sunday dates not open until 2 a.m. like the weekend dates? Some of us like to save money by avoiding the weekend, but with two fewer hours, we can’t see all of the attractions.
-Michael Jaworski
Some nights have earlier closing times because they are less busy. Universal offers passes for multiple nights so you can be sure to see everything.

Is Islands of Adventure going to play a part? -Aj Danna
Will they ever expand to two parks again? -Ryan Rewasiewicz
Not this year, but they haven’t ruled that out for future years.

How do you see HHN evolving in time?
-Stuart Newsom
This year’s event is sort of a goodbye to all the past icons as they look forward to the future. They’re looking for the next big icon to take them forward. It may be Fear. If this year is an indication, they’re moving more toward coming up with their own stories instead of using so many characters from movies.

Are we going to get a roaming chain saw gang this year, or will they be confined to one area?
-Giles
The chainsaw gang will appear in one of the scare zones. Watch the video above for details.

Will guests be able to “shoot” zombies in ZombieGeddon?
-Mike Kerrigan
Mike said that would be very cool, but no.

Will the horror parade ever return?
-Gail Weafer
They have no plans at this time. Logistically, with all the scare zones, it just wouldn’t work this year.

Be sure to get your copy of the Fall issue of Orlando Attractions Magazine and keep checking back here for videos and photos from opening night.

Thanks so much for getting our questions answered! Very cool.

Christmas activities include a movie theme at...

Maybe coming to a theme park near...