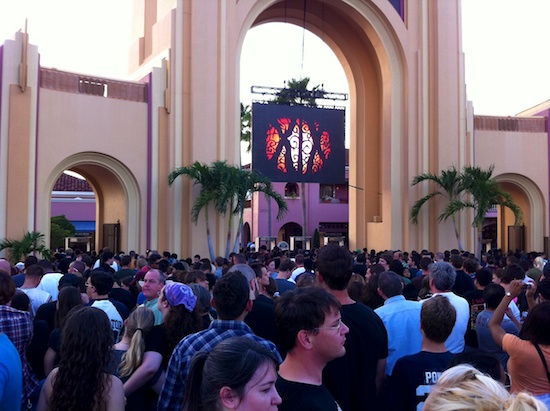 Halloween Horror Nights (HHN) officially kicks off this Friday Sept. 24, 2010, but a special preview was held tonight for Universal team members and their guests. Luckily a friend of a friend works there and brought me as their guest. We’re going to bring you a full report with more photos and videos after the official opening. Consider this a sneak peek.

Since this was known as a technical rehearsal, some things may look different on opening night. In fact, Universal tries to improve things all throughout the event. If you don’t want any spoilers before you attend yourself, or if you don’t like scares and a bit of gore, click to another page.

As you can see at the top of this page, even though it was just open for employees and their guests, it was still quite crowded. The video screen was playing the same video you see when completing the Warehouse Experience game on the official HHN website. It shows five of the past HHN icons talking about Fear. 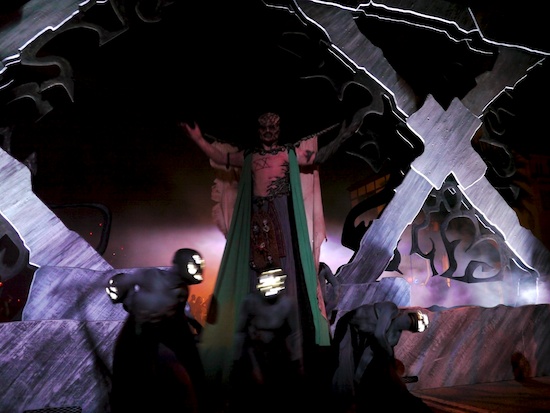 Here’s what most people wanted to see first – Fear. He was posing with his minions below him. 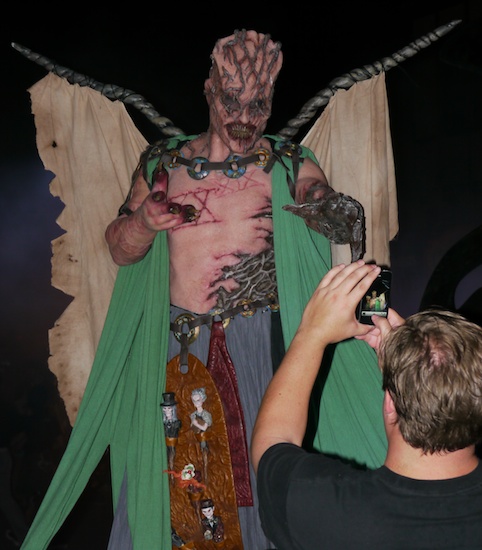 You can meet him in the Fear Revealed scare zone (of course). 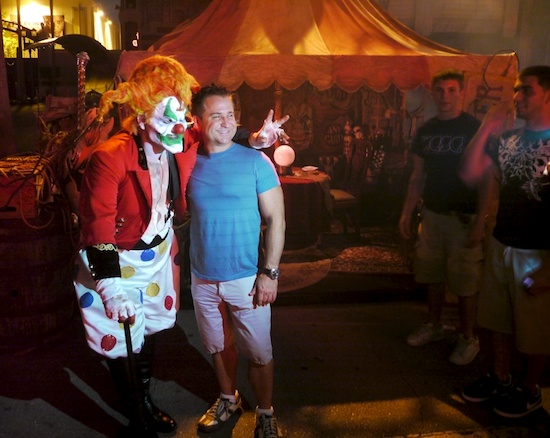 In Fear Revealed, you can also meet Fear’s other puppets, Jack the Clown, The Storyteller, The Caretaker, The Director and … 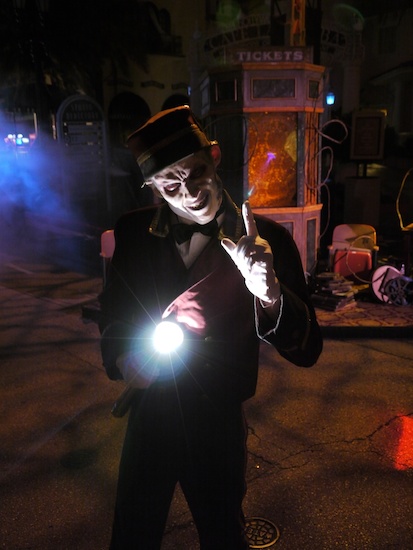 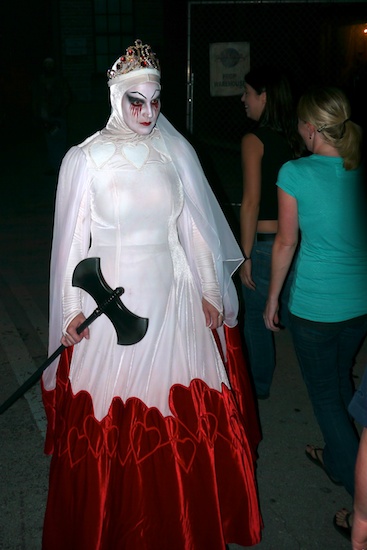 The HHN: 20 Years of Fear scare zone features a lot of props from past years plus many characters you may recognize. This is the Red Queen from the Asylum in Wonderland scare zone in 2008. 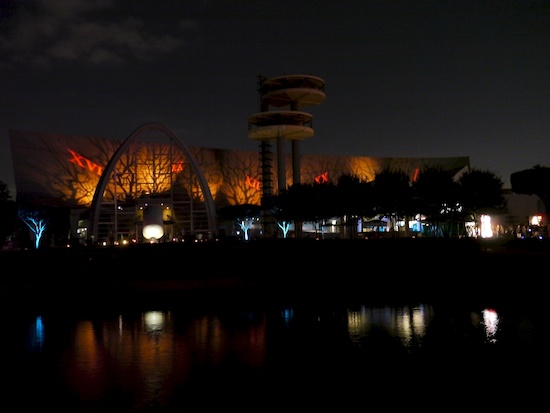 I noticed a lot of cool lighting effects throughout the park. Most feature roman numerals from 1 to 20. 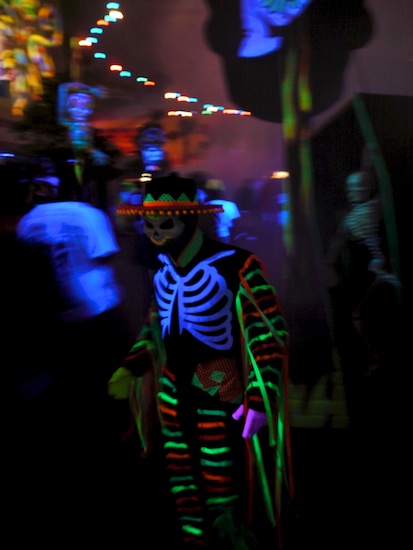 Lots of glowing fun in the Esqueleto Muerte scare zone. 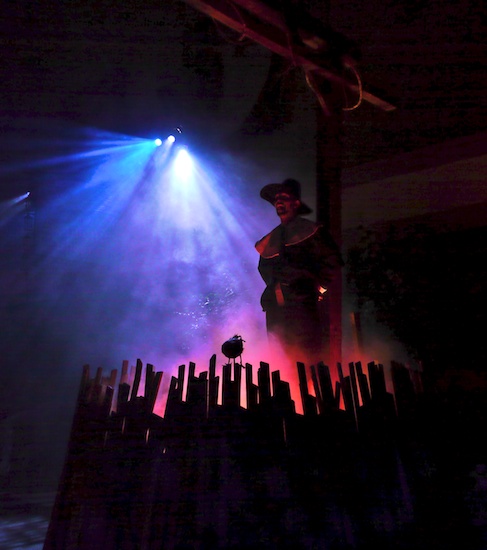 This poor pilgram was begging for help in The Coven scare zone. 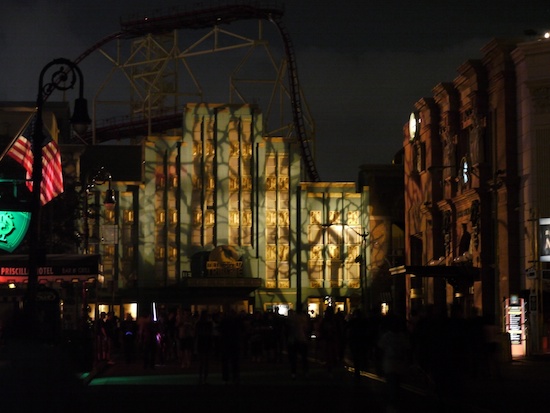 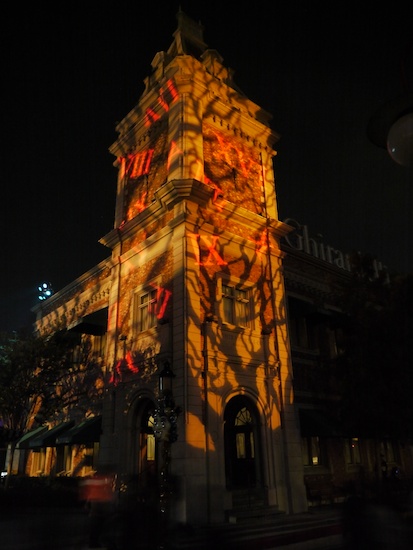 Be careful when you go through the Saws n’ Steam scare zone. You may get really wet. There were a couple of places where mini shows were happening in this zone, but the fog was too heavy to be able to see one of them. But that’s why they have a technical rehearsal. 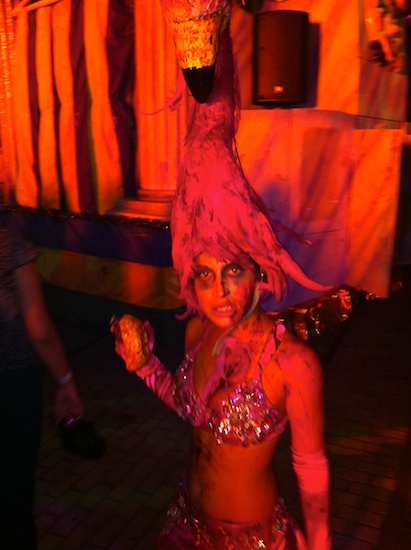 This was from my favorite scare zone so far, Zombie Gras. As you approach, you’ll hear familiar Universal Mardi Gras music, but as you get closer you realize this isn’t the Mardi Gras party you remember from last spring. 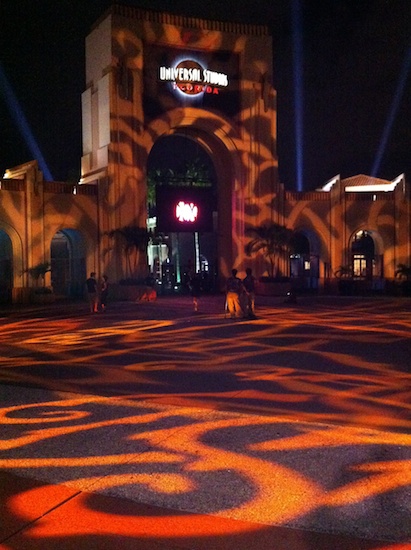 One last picture of the entrance, all lit-up as I left the event.

No photos were allowed, but I saw the first performance of Bill & Ted’s Excellent Halloween Adventure. It was great again this year. I especially liked the parodies of Twilight, Toy Story and The Wizarding World of Harry Potter. I’ll say no more.

Be sure to check back this weekend for our full wrap-up of opening night, including more pictures, video of the scare zones and information on all the haunted houses and shows. Halloween Horror Nights runs select nights through Halloween at Universal Studios.

Parfums Givenchy opens at Epcot – its first and only U.S. store

These photos are ridiculous. I’m always taken aback by the level of detail they go into for this. I don’t know if I’d be able to handle how crazy it all is just walking in. My friend told me that the best way to get ready is to watch a bunch of horror movies first. This year I think I’ll start with Scar 3D. I’ve heard it’s a blast. Hopefully, it’ll get my mind set to handle whatever Universal Studios throws at me.