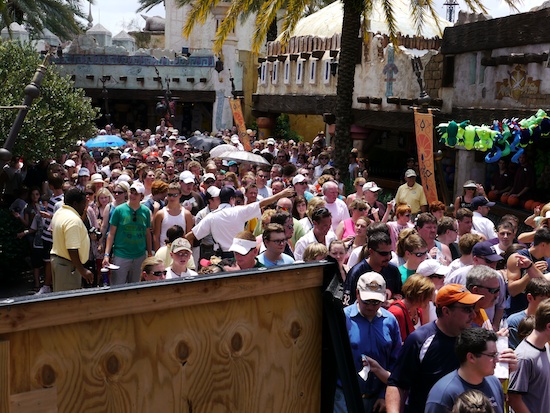 The Wizarding World of Harry Potter had its official opening on Friday. Hardcore theme park and Harry Potter fans made it in after many hours of long lines through Islands of Adventure and CityWalk. The long lines continued the day after. It may be a while before it’s an easy walk into Hogsmeade.

Opening day started early for many. Fans began arriving in the CityWalk parking garages around 5:30 a.m. The park officially opened at 9 a.m. with the grand opening show starting shortly after that, but guests were allowed in early to line up. Although none of them could get up to the area where the opening celebrations were held to see the stars in person, that didn’t seem to matter as most were cheering as they finally made their way into the Wizarding World.

Here’s a look at their first reactions.

The lines were long all day, stretching from The Lost Continent area all the way around the whole park and into CityWalk at times. Guests were periodically let into the Wizarding World in large groups at a time. Some reported they waited up to nine hours to get in.

Inside the Wizarding World, lines formed outside every shop, on both sides of the butterbeer cart, outside Hogs Head Pub, Three Broomsticks restaurant and at the Harry Potter and the Forbidden Journey ride. The word of the day was “wait”. On a good note, The Forbidden Journey queue, which takes guests through a tour of Hogwarts Castle, never reached longer than 120 minutes. For most of the day it was 75 minutes. Surprisingly, the Dragon Challenge and Flight of the Hippogriff coasters stayed at five to 10 minute waits most of the day.

Our advice is to arrive first thing or late in the evening. Stay hydrated (water and butterbeer), and be patient.

Our friends at Magic City Mayhem captured this video of the opening day morning crowd in CityWalk trying to entertain themselves by doing the wave.

• Read more about The Wizarding World of Harry Potter in the Summer 2010 issue of Orlando Attractions Magazine.

The crowds are insane.

I’m a massive Potter fan, so I would definitely stand in the line, but it would be hard, especially in that Florida heat. Once you get in the park though, I bet it’s worth it. I know it is.