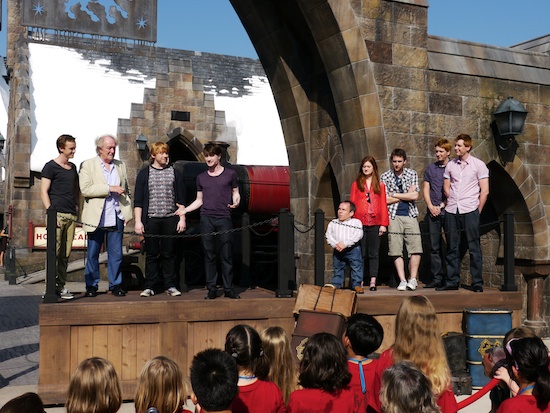 The Wizarding World of Harry Potter celebrated its grand opening on Friday, June 18, 2010 with help from some of the Harry Potter movie stars and thousands of excited fans – officially becoming the only place in the world where the adventures of Harry Potter come to life.

More than five years in the making, The Wizarding World of Harry Potter has become the most highly anticipated theme park opening of 2010. Guests can now experience the adventure first-hand in Universal’s Islands of Adventure. The spectacularly detailed area, inspired by J.K. Rowling’s compelling stories and characters, features multiple themed attractions, shops and a restaurant – all faithful to the books and films.

“I said right at the beginning, either we do it right or we don’t do it at all,” said J.K. Rowling, author of the widely successful Harry Potter series. “The teams at Universal and Warner Bros. have done it right, so I am so happy.”

Here’s our full video from the front row of the opening celebration.

• For more on the Wizarding World, be sure to get the Summer 2010 issue of Orlando Attractions Magazine.

Matt, just wanted to congratulate you on your coverage of the Wizarding World of Harry Potter. Your videos and articles are the best on the Internet.

Some of your competitors are lazily uploading videos to YouTube that they didn’t shoot themselves, and getting tens of thousands of views in the process, which is a little unfair. Even if yours don’t have as many views, your videos are the best. You should be proud of all the time and effort that you put into making your videos, because you didn’t cheat, you made them from scratch.

Thanks John, that means a lot. We ry to produce the best quality videos we can even if that means we’re not the first to get them online. I also want to thank Jimmy Strater for helping me shoot and edit some of the videos.

No problem, Matt. Your latest “Excited fans finally get into The Wizarding World of Harry Potter” video really takes things to the next level. All of the interviews you did with the fans, and the quality of the editing, resulted in a really professional video that is incredibly entertaining to watch. It’s like a real TV news report.

The quality of that video has really set you apart from other guys out there, who basically just have enough spare time and money to jump into the parks with a video camera, at the drop of a hat, and suck up thousands of YouTube views in the process. Sure, it’s great to be first, but as Walt Disney once said, “quality will win out”.

Kevin from Disney/Pixar’s ‘UP’ meet-and-greet coming to...