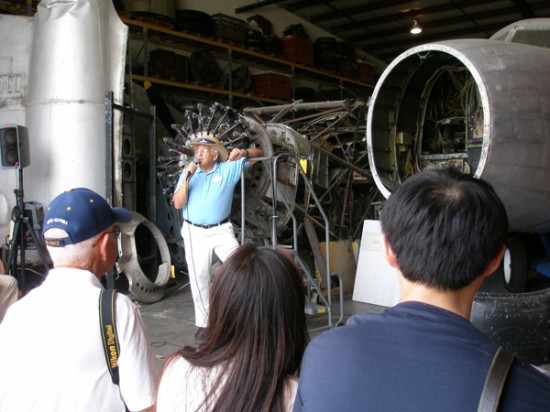 Fantasy of Flight is giving guests the chance to see an additional 20,000 square feet previously off-limits, filled with even more rare and vintage aircraft, aircraft parts and flight artifacts. The treasure trove of aviation artifacts is named “Golden Hill,” a nod to Silver Hill, the nickname for The Paul E. Garber Preservation, Restoration, and Storage Facility of the Smithsonian Institution’s National Air and Space Museum.

Phase I of Golden Hill was built specifically for public viewing and opened in the summer of 2012 with such a tremendous guest response that Fantasy of Flight decided to open up its entire storage facility in January 2013, sprucing up its existing facility to welcome guests.

Among the residents of Golden Hill Phase II:

This restricted area is accessible only by escort. Guests are loaded aboard the vintage, open-air “Orlampa Express” trolley where they can enjoy views of the attraction, the planes on display on the tarmac and daily flights of vintage aircraft and finally, Golden Hill.

The Fifth Annual Legends & Legacies Symposium Series brings to life the experiences of some of America’s aviators through permanent and semi-permanent exhibits, real aircraft, and their own personal stories and interactions with guests. All new programs this year take an in-depth look at World War I and the Cold War as well as saluting veterans of every era. The five remaining topics scheduled for 2013 include: “The First World War,” on April 6; “D-Day: Normandy & Beyond,” May 3 and 4; “Espionage: The Cold War,” Oct. 4 and 5 and “Veteran’s Day Salute: A Celebration of Service,” Nov. 9 and 10.

Symposium events are included in the price of Fantasy of Flight general admission and are free for annual pass holders. General admission is $29.95 for adults and over and $15.95 for children, ages 6-12, plus tax. Children five and under are free with full paying adult. For more information, visit www.fantasyofflight.com.

Fantasy of Flight back open with a smaller...

Fantasy of Flight closing its doors to the...

Fantasy of Flight cuts back on operating hours...

Meet the Tuskegee Airmen at Fantasy of Flight...

PARKsaver: Florida Residents buy one, get one at...