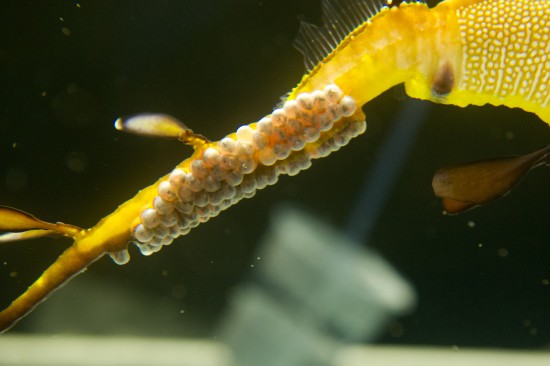 Like the closely related sea horse, male sea dragons are actually the ones in charge of bearing young. The female deposits the eggs onto a spongy patch found on the underside of the male’s tail. The eggs are fertilized during this transfer and remain on their father for the next five to nine weeks. The dad is then responsible for incubation and care of the eggs until they reach full term.

Check out this video of the eggs hatching:

Close to 100 eggs were laid by the female in June and will continue to hatch over the next couple of weeks. Once the eggs hatch, the tiny sea dragons are on their own. They’ll receive nutrition by absorbing the remains of their yolk sac and from zooplankton found in the water. Once the egg sac has been absorbed, the newborns will begin feeding on newly hatched brine shrimp. The baby sea dragons will take around a year to reach full size.

The sea dragon is a protected animal found naturally in tropical coastal waters of south and west Australia. Due to human invasion and pollution, the numbers of sea dragons that live in their natural environment have drastically dropped since the 1980s. The weedy sea dragons can normally be seen at SeaWorld in the aquarium exhibit inside Manta.