Theater Review: ‘Finding Neverland’ loses itself along the way 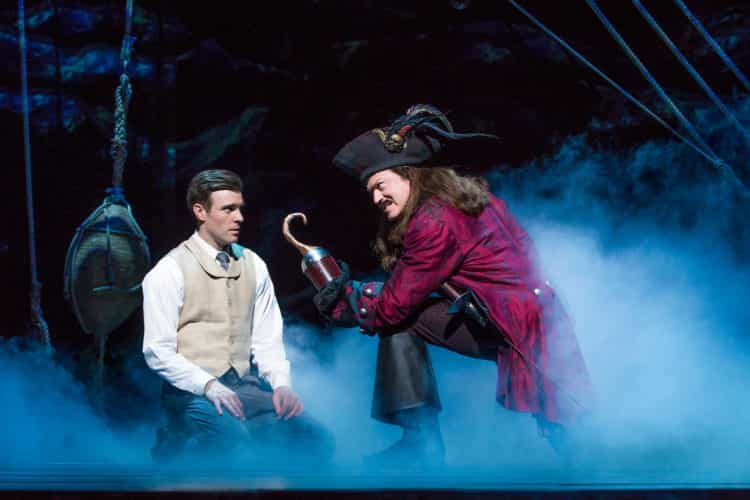 Adapted from the movie of the same name, and based upon the play “The Man Who Was Peter Pan,” “Finding Neverland” tells the story of playwright J.M. Barrie as he struggles to write a new play. The audience is informed immediately that this will become what we know as “Peter Pan” with the rest of the story taking us through the play’s creation and opening night.

Along the way, Barrie meets and is inspired by a widow, Ms. Sylvia Llewelyn Davies, and her four boys.  “Finding Neverland” mostly alternates between Barrie’s growing relationship with the Davies and his struggles attempting to convince his producer, (as well as a colorful cast of actors) that his ambitious script is a good idea.

Unfortunately, the script for “Finding Neverland” is also a bit of a hard sell. The story tends to meander along and has a hard time building up anticipation. The central conflicts of the plot (which are pointedly announced to the audience during the song “Circus of Your Mind”) seem to resolve themselves without much input from the main character leading to less investment in his “struggle.”

The music in “Finding Neverland” is entertaining if not memorable and ably sung by the cast.  Rory Donovan, playing Barrie’s theater producer Charles Frohman, was a particular standout who added a welcome bit of subtly. Too much of the show is played with heavy-handed winks and nods when another element of the Peter Pan story is discovered by Barrie. Without spoiling anything, Barrie stumbles across the inspiration for Captain Hook’s hook in a such a forced and blatant way (accompanied by an extra long “realization”) that it loses its meaningfulness. Whether this is because of poor direction, poor scripting, or a combination of both is hard to tell.

Don’t go to “Finding Neverland” expecting a kids show. While the show doesn’t feature sex or violence, it does deal with heavy and tear-jerking themes about love, death, and fulfillment which may go over the heads of younger audiences. This is particularly ironic considering there is a message in the play that theater should be accessible for children too.

Ultimately, I did enjoy myself at “Finding Neverland” but left feeling a bit underwhelmed. The show had many laughs and poignant moments as well as several entertaining songs. With a bit more subtly and plot points worth investing in, “Finding Neverland” could have soared straight on till morning.

“Finding Neverland” is currently playing at The Dr. Phillips Center for the Performing Arts in downtown Orlando every night through June 11. Tickets start at $33.75 and you can get them at drphillipscenter.org.

‘Home for the Holidays’ is a delightful...