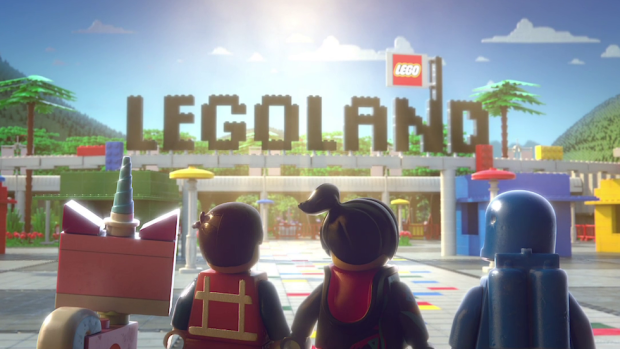 Legoland Parks has released a first look at a new attraction that reunites the stars of “The Lego Movie” in an all-new story appearing exclusively at Legoland theme parks and Discovery Centers in 2016.

The 30-second clip released today gives fans the first glimpse of what happened after the blockbuster movie, when Emmet, Wyldstyle, Unikitty, MetalBeard and Benny reunite at the invitation of a shady new character, Risky Business, who plans to open a curious theme park bearing a suspicious resemblance to Legoland.

Returning to voice their iconic characters are actors Elizabeth Banks (Wyldstyle), Nick Offerman (MetalBeard), Charlie Day (Benny) and Alison Brie (Unikitty). Actor, writer and comedian Patton Oswalt lends his voice to the scheming Risky Business, whose Evil Secret Plot requires the heroes to call on the Master Builder skills of a surprise ally to save the day.

The short 3D film will play several times a day at each Legoland site, with 4D effects such as wind, water, fog and more.

Los Angeles-based Pure Imagination Studios is creating “The Lego Movie 4D A New Adventure” with input from Phil Lord and Christopher Miller, the writer-directors who brought “The Lego Movie” to life, along with contributions from Rob Schrab, who is directing the movie’s sequel, due in 2018.

For more information about “The Lego Movie 4D A New Adventure,” visit florida.Legoland.com, california.Legoland.com and the Official Legoland Florida Resort Blog at llfblog.com.