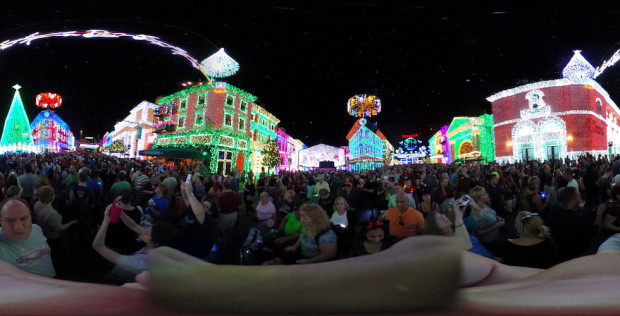 We’re always looking for new ways to help you experience theme parks and attractions when you can’t visit in person. While we don’t have full hologram and smellavision capability just yet, we do have a new way to bring you 360 Degree Virtual Reality videos.

Before we get to the videos, just a note to tell you they’re best watched through the mobile YouTube app. With the app, you can move your phone or tablet all the way around and up and down to see all around you – just like you’re there. You can also watch using your phone and one of the VR viewers on the market.

You can watch them on your computer too, you’ll need to use your mouse to click and drag to look around. Also note that the Safari browser on Macintosh computers doesn’t yet allow you to watch 360 degree videos on YouTube. If you have a Mac, download and use the free Google Chrome browser.

We thought it’s only fitting to make our first new 360 videos at The Osborne Family Spectacle of Dancing Lights at Disney’s Hollywood Studios, since this is the last season for them.

Take a walk through the Osborne Lights with us:

Watch as the Osborne Lights dance all around you:

Sine attractions that only appear in front of you aren’t the best use of 360 degree videos, we have to pick and choose which ones we film. Also, since the camera picks up everything around it, please excuse having to look at us holding the camera in every video. Just pan up and away. 😉

Ride with us on the Tomorrowland Transit Authority Peoplemover at Magic Kingdom:

If the videos aren’t working for you here on our website, try visiting our 360 Degree playlist on YouTube. And don’t forget to subscribe to our YouTube Channel so you’ll know when we add more. Let us know below what other attractions you’d like to see in 360 degrees.

Doc Brown to be in The Simpsons...