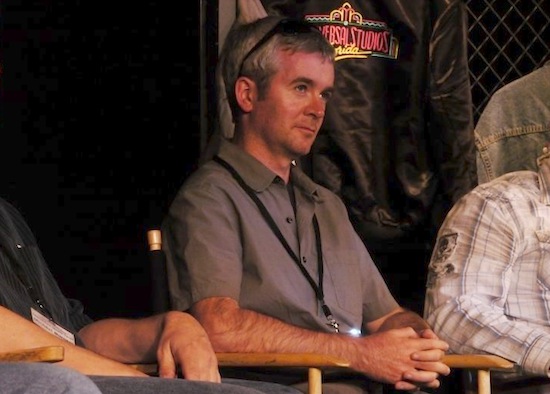 Today, they kick-off their Five Questions series with Alan Gilmore, art director for Harry Potter films and The Wizarding World of Harry Potter.

Q: We know that, while very popular in the U.S., Harry Potter is a major part of popular culture in the U.K. So, how did the story inspire your imagination?

A: Harry Potter has an enormous fan base who are very interested in his world and the fact that his world is located in the U.K. And, because the stories are based in our popular culture, the world Harry inhabits is exactly what we expect it to be. The landscape Stuart Craig, the production designer for the films, created for the films is entirely plausible and rooted in reality. Harry’s school and house felt very familiar but also have an extra quality – a sense of heightened reality. So our goal in creating The Wizarding World of Harry Potter was to create a place based in that reality, which you can really believe in. This real world setting made it quite interesting to imagine all these spaces and places Harry could exist in. To actually be involved in the Harry Potter film projects was very exciting. I have known Stuart for several years. The chance to work with him and learn how he designs, and then see how he realized his spaces and his fantastic visions, was a really unique experience.

Q: With your job as art director, both on the films and here at Universal Orlando Resort, what has been your role in bringing The Wizarding World of Harry Potter to life?

A: I see myself as a conduit, shepherding Stuart’s design and acting as a guardian for his vision and designs from all of the movies. I have worked alongside the film design team from London for a long time now and have learned so much from them. We sourced from an extensive back catalog of sets and settings from the films, and many of the spaces we created for the films have been reinterpreted for The Wizarding World of Harry Potter. In trying to bring Harry’s world to life I have worked closely with the team at Universal Creative, in a very new way, and we’ve had to bring settings seen remotely in the films close together here in Orlando. The overall composition was very carefully considered. We have had to invent some new elements as well. We have developed Hogsmeade in great detail, including features specifically created for The Wizarding World of Harry Potter. We also brought a lot of iconic stores into Hogsmeade which is something the fans will be quite excited to visit and experience.

Q: What has been the biggest challenge in bringing the visuals from the film to life here at Universal Orlando Resort, and what has the main difference been between designing for the two?

A: The film world is a very different challenge to the theme park world. In the film world the viewer is the camera. You know where your viewer is, and you can design to that viewer, composing the settings from one or two viewpoints. Whereas, with the theme park world, it has to work from every angle. We had to think about multiple angles, from a child’s point-of-view, to a very tall person’s point-of-view, and for everyone in between. I’ll be honest, everything was challenging. We had a very good run up of two years, and it gave us a lot of time to work out the details. For example, the rock that Hogwarts sits on was daunting at first but we soon found a way to create the most realistic finish in any theme park. It is a great success. The snow was also very difficult. We really wanted to have snow everywhere, creating the most amazing snowscape and that cold Scottish feeling. Psychologically the snow creates a sense of a lower temperature. To try and bring that cold to Orlando, that is quite hard. In the end, I hope what we created gives guests a good experience!

Q: What element(s) of The Wizarding World of Harry Potter are you the most proud of and excited about? Or are there favorite elements from the films that were you are now able to realize in full?

A: Oh, absolutely, I think the castle is the primary example of being able to realize the visuals from the film on such a grand scale, it has never been built to this extent before. We made a very concerted effort to bring Hogwarts to life, making it really look impressive from every angle. Hogsmeade and the Three Broomsticks is another area that has really come off beautifully. The Three Broomsticks is an incredible space, the detail and finishes are amazing. This is a great joy to me. But overall, I think the detail, the absolute rigorous pushing of detail is beyond compare. Everything is correct. Our mantra was authenticity, and I worked very closely with the entire team to make sure we have every area detailed as much as it possibly could be. There is hardly a corner that you can’t look in that does not have some amazing quality of detail, finish and paint. I brought many film making techniques to this project also. A layer of aging was applied throughout making everything appear to be old and lived in. I think the feeling of actually entering Harry’s world is what people will take away from visiting.

A: I would want them to come through the entry arch at Hogsmeade and take a moment to just absorb the amazing spectacle in front of them. The viewpoint just beyond the arch beside the train looking toward the castle is the most encompassing view of The Wizarding World of Harry Potter. It really gives you a sense of this amazing place. It should be quite magical to see the reactions on the fans and guests faces as I am sure this will be the first time most people will have ever been in an environment like this. So, for me, I think this starting point is where you want to have your first experience and explore Harry’s world.

Universal also provided a short video of Alan answering one of the questions.

And here’s our interview with him from a couple of weeks ago where we asked him 10 questions.

Get your tickets now for Star Tours Last Tour to Endor

I can’t wait I’m going on the 20th or so right after it opens up and right after my cousin leaves my house because he’s visiting me from missouri but I’m deffinitely going to be there because of this part of universal studios that is the main reason!!! -Lucy.

Fire breaks out at Islands of Adventure...