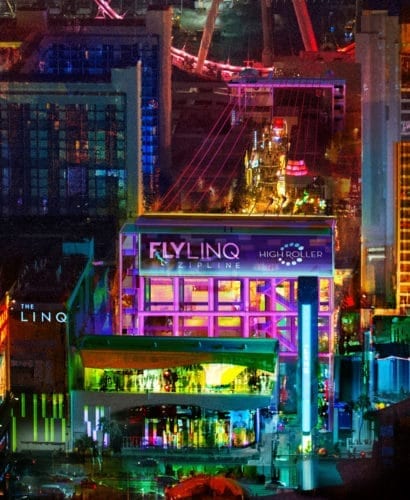 The Fly LINQ zipline will let Las Vegas visitors soar from the Strip to the High Roller in late 2018.

Caesars Entertainment Corporation has announced the addition of the Fly LINQ zipline to the LINQ Promendade, which will give thrillseekers a bird’s-eye-view of the famous Las Vegas Strip when it opens in late 2018.While Vegas is home to other zipline experiences (like Slotzilla on Freemont Street and Voodoo at the Rio hotel), Fly LINQ is expected to be the first and only zipline on the Las Vegas Strip. Developed by the team behind the High Roller, the world’s tallest observation wheel, the approximately $20 million Fly LINQ features 10 side-by-side zip lines, capable of simultaneously launching all riders. The experience will be constructed on The LINQ Promenade, the open-air shopping, dining and entertainment district situated at the heart of the Las Vegas Strip. Construction is expected to begin in the spring of 2018. 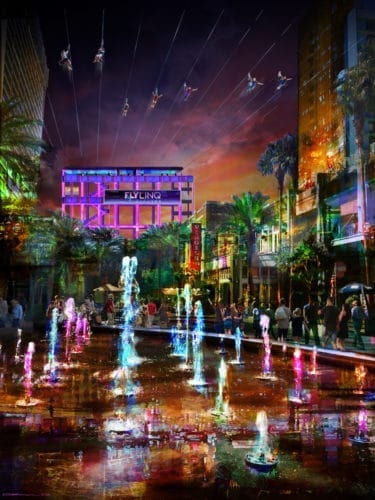 Guests will begin their ride experience by taking an elevator designed to provide open strip views from the Vortex at The LINQ Hotel & Casino to the top of the 122-foot-tall launch tower. Guests will arrive on the launch deck, where queuing and gear-fitting will take place. Riders can choose to ride in either a “superman” or seated position, and will reportedly hit average speeds of 35 miles per hour during their 35-second flight. From the launch tower, the ride continues eastward towards the High Roller, traveling 1,080 feet (about 1/5 of a mile) above The LINQ Promenade. Riders disembark near the base of the High Roller.

The zipline will feature a custom-built automated ride system with two automated gear retrieval lines that hope to keep queues moving quickly by swiftly returning gear back to the launch tower. Guests will be able to opt to purchase professional photos (either individually or as a group) dressed in full flight gear and in mid-air. Pricing has not yet been announced.

Fly LINQ will reunite many of the team members behind the development of the High Roller observation wheel, including Themed Development Management (TDM) as project manager. Fly LINQ is being developed in conjunction with Xventure LV, a thrill ride company built by hospitality and attractions industry veterans. Xventure specializes in high-capacity adventure rides situated in urban locations. Xventure will lead the development and operations of Fly LINQ.

“Xventure is thrilled to work with Caesars Entertainment to give thrill seekers an adrenaline-packed experience in the center of the Las Vegas Strip,” says Joey Paulos, principal and managing member of Xventure.

The LINQ Promenade is an open-air shopping, dining and entertainment district, anchored by the world’s tallest observation wheel, the High Roller, located on the Las Vegas Strip. The LINQ Promenade features more than 30 retail, dining and entertainment venues and plays host to a variety of special events and festivals. For more information, visit TheLINQ.com, and watch these videos for a look at some other high-flying Las Vegas attractions:

‘Escape IT’ escape room is coming to...