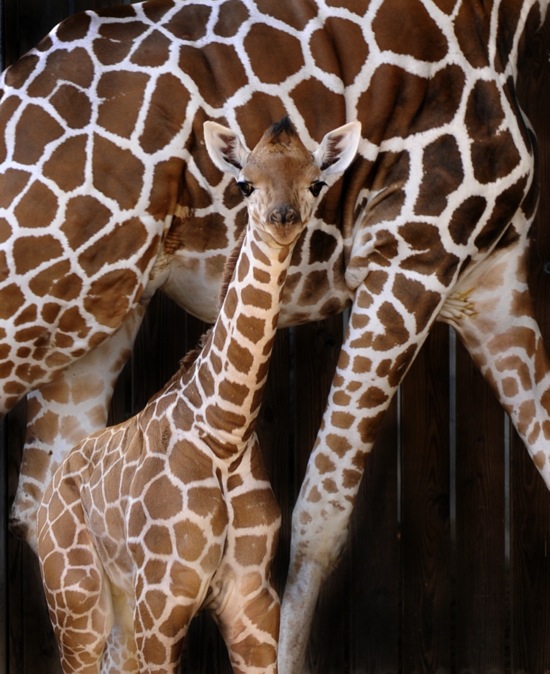 Walt Disney World Resort is having a bit of a baby boom this year with the birth of a fourth baby giraffe. Entering the world at 6-foot-tall and 155 pounds, Bonsu delighted members of the animal programs team at Disney’s Animal Kingdom in the early morning hours on Sept. 28.

Bonsu’s name is inspired from the Akan language in Ghana and means biggest and strongest fish in the sea. He is the fourth male, and 11th giraffe overall, born at Disney’s Animal Kingdom since the park opened in 1998. He is also the second calf for his mother Nikki, whose first offspring, a female named Rori, was born in 2006. She can be seen today on the savannah at Disney’s Animal Kingdom Lodge.

Makena, whose name means “Happy One” in Swahili was born on Leap Day Feb. 29 weighing in at 118 pounds and 5-foot, six inches tall.

Marley was born March 14 and weighed 122 pounds and stood just under six feet.

AJ arrived March 27, standing about six feet tall, and weighing in at 145 pounds at birth.

When these giraffe calves grow up, each of them could be as tall as 15 to 18 feet. The newest calf and his mother are doing fine and are expected to rejoin their herd on the savannah at Disney’s Animal Kingdom in the next few weeks.

Fun Facts about Giraffes
• The typical gestation period for a giraffe is approximately 15 months.
• An adult giraffe’s neck alone can measure up to 7-feet, and their tongues can be as long as 18 inches.
• Giraffes also have their own set of unique skin markings, similar to a human fingerprint.

Giraffes at Walt Disney World Resort are bred through the Association of Zoos and Aquariums (AZA) Population Management Plan, which is a consortium of zoos and wildlife parks working together to conserve and breed animals. Disney’s Animal Kingdom theme park and Disney’s Animal Kingdom Lodge are accredited by the AZA. With its more than 200 accredited members, AZA is a leader in global wildlife conservation.

The newest issue of Orlando Attractions Magazine is now available

A Spectacular Bourne Stuntacular – DePaoli on...