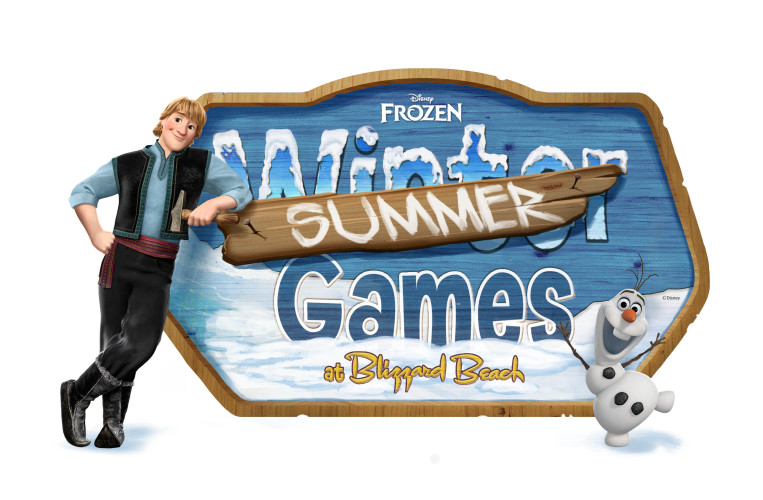 Chill out with Olaf at Walt Disney World’s Blizzard Beach during the Frozen Games starting May 27.

Summertime at a water park might not be the safest spot for a snowman, but that isn’t stopping Olaf from teaming up with Kristoff to host the inaugural Frozen Games at Disney’s Blizzard Beach, running from May 27 through August 21 at the Walt Disney World resort.

Kristoff and Olaf from Frozen will lead teams of visitors in a fun day of Frozen activities. Guests of all ages visiting Blizzard Beach may choose to join Team Kristoff or Team Olaf to participate in a variety of winter-themed activities throughout each day, including:
· Ice Pail Relays – teams will line up and pass pails of water quickly from one person to the next, trying to fill a container at the end. The team that fills their container first is the winner.
· Snowball Toss – pairs compete in a snow-themed water balloon toss from progressively greater distances. The pair that gets the farthest apart without breaking its water balloon is the winner.
· Ski Pole Limbo – guests play limbo, using a ski pole as the bar.
· Slide Races – teams race down one of the signature water slides at Blizzard Beach, and much more!

Olaf and Kristoff will take part in the Frozen Games’ opening and closing ceremonies by appearing on the Observation Deck near the Summit Plummet attraction each day, accompanied by trumpet fanfare, banners and music. Additionally, one guest will be chosen each morning to be the Ski Captain and thus the first guest to take the plunge down Summit Plummet, signaling the start of the Frozen Games. From the observation deck, Olaf and Kristoff will give regular updates throughout the day on their teams’ progress and achievements, as well as announce the winning team of the Frozen Games.

The Frozen Games are an all-day event at Blizzard Beach, beginning shortly after the park opens. Guests can sign up at the park entrance, and all activities are included with regular park admission. For more information about Blizzard Beach visit https://disneyworld.disney.go.com/destinations/blizzard-beach/ and enjoy this video tour we took of the park a few summers ago: