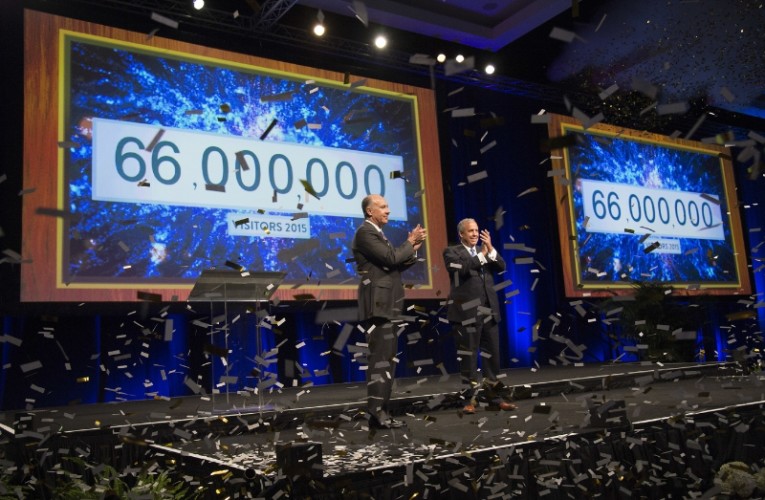 If you feel like Orlando is getting more crowded with tourists every time you visit, it isn’t just your imagination. According to the official tourism organization Visit Orlando, the Central Florida destination hit a new all-time record in 2015 of 66.1 million visitors, growing 5.5 percent from 2014 and solidifying Orlando’s position as the most visited destination in the nation.

“Reaching more than 66 million visitors to Orlando is an amazing accomplishment for our tourism community,” said Visit Orlando President and CEO George Aguel. “This new milestone and rapid growth over the past two decades is a result of having a tourism industry and community partners that are focused on growth and investment, dedication to the needs of our visitors and the global marketing and sales efforts of our Visit Orlando team and member companies.”

“We’re so proud to break another national record and again be named the top visitor destination for the U.S.,” said Orange County Mayor Teresa Jacobs. “With our superb convention center and culture of hospitality, world-class theme parks, family-friendly entertainment and luxury dining and lodging amenities, it’s no surprise that Central Florida remains the top destination for business, family and leisure guests.”

Visit Orlando announced the record-breaking achievement at its annual Travel & Tourism Luncheon, a celebration of Orlando’s tourism community, attended by more than 800 tourism and community leaders. The event was held during the 33rd annual National Travel and Tourism Week, which unites communities each year to celebrate what travel means to American jobs, economic growth and personal well-being.

“Orlando has reached yet another historic milestone with more than 66 million visitors in 2015—a significant achievement for Orlando and the U.S. travel industry,” said U.S. Travel Association President and CEO Roger Dow. “The region’s remarkable commitment to travel and tourism—with especial kudos to Visit Orlando, its tourism community members, and the leadership of local public officials—enabled it to hit yet another visitation record.”

Festival of Chocolate in Tampa gives a...

Monopoly Lifesized is opening this summer in...