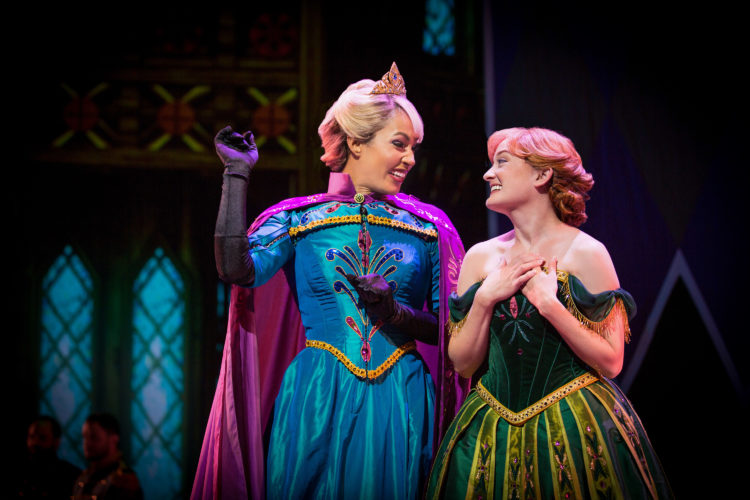 Anna and Elsa are now onstage in Frozen Live at the Hyperion, now playing at Disney California Adventure.

Fans of Disney California Adventure’s long-running Aladdin musical may not be done mourning yet, but that didn’t stop the Anaheim park from being mobbed this morning by guests hoping to see an premiere performance of Frozen Live at the Hyperion, which debuted today in DCA’s Hollywood Land.

This new theatrical interpretation of the Oscar-winning film Frozen is directed by Tony Award-nominated Director Liesl Tommy, and show features elaborate costumes and sets, an opening cast and crew of more than 200, six full musical numbers, and a 2,200 square foot video wall.

“While our production of ‘Frozen’ stays true to the heart and soul of the film, we have adapted it for the stage so it’s truly a musical theater production that befits our beautiful Hyperion Theater,” said Dana Harrel, creative entertainment executive with Walt Disney Imagineering. “The goal of this creative team is to take all audiences – including those who know the film, and those new to these characters­ – on this exciting and touching adventure with Anna and Elsa. We know that for many in the audience — adults and children alike – this production will be a first or rare theater-going experience, and we want to make it as magical as possible.” 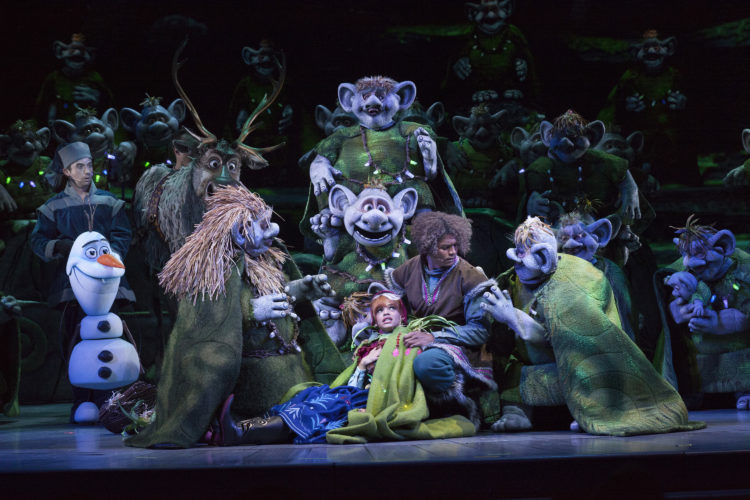 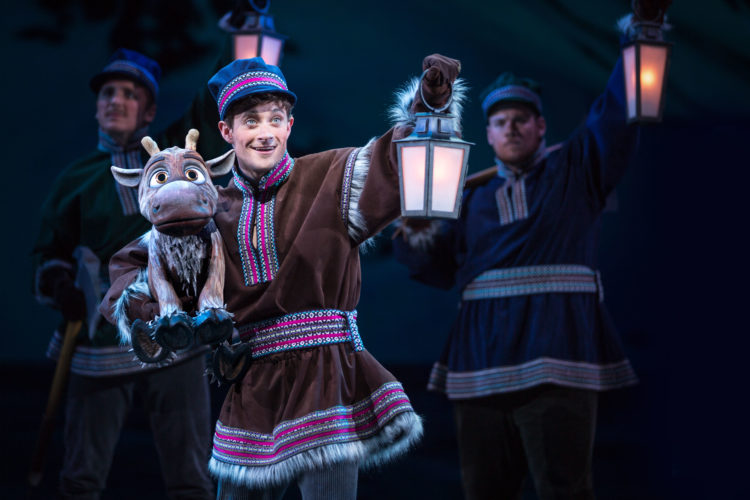 The new adaptation features music and lyrics by the creators of the film score, Kristen Anderson-Lopez (“In Transit,” “Up Here”) and Robert Lopez (“Avenue Q,” “The Book of Mormon,” “Up Here”), and is adapted from the screenplay by four-time Tony Award nominee Chad Beguelin (“Aladdin – A Musical Spectacular” at Hyperion Theater; Broadway: “Gotta Dance,” “Aladdin,” “The Wedding Singer,” “Elf”).

“Frozen – Live at the Hyperion” is directed by Tommy, who was recently nominated for a Tony Award for her Broadway show “Eclipsed.” The choreographer is Christopher Windom and this is his seventh collaboration with Tommy. The musical supervisor/arranger/adaptor is Jason Michael Webb, whose Broadway credits include “The Color Purple,” “Motown: The Musical,” “Violet,” and “Memphis.” Clint Ramos, the principal costume designer, was also nominated this year for a Tony Award for his work on “Eclipsed.” The principal designers are Robert Brill (scenery), Charles Lapointe (wigs), David Weiner (lighting), Aaron Rhyne (projections) and Broken Chord (audio), and Ramos (costumes). 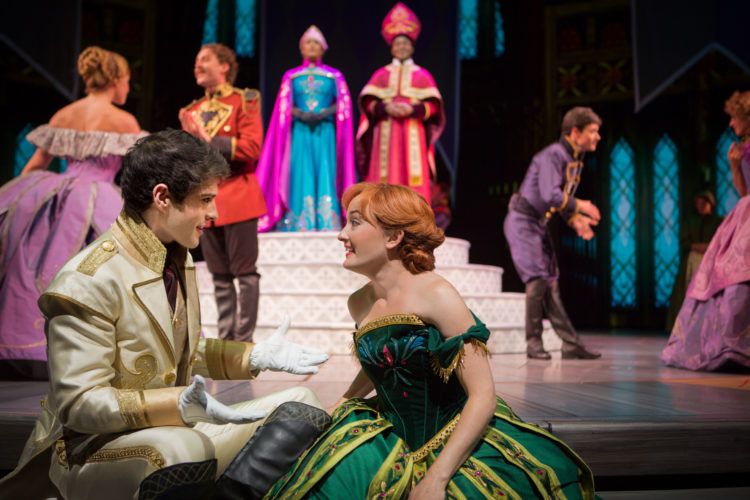 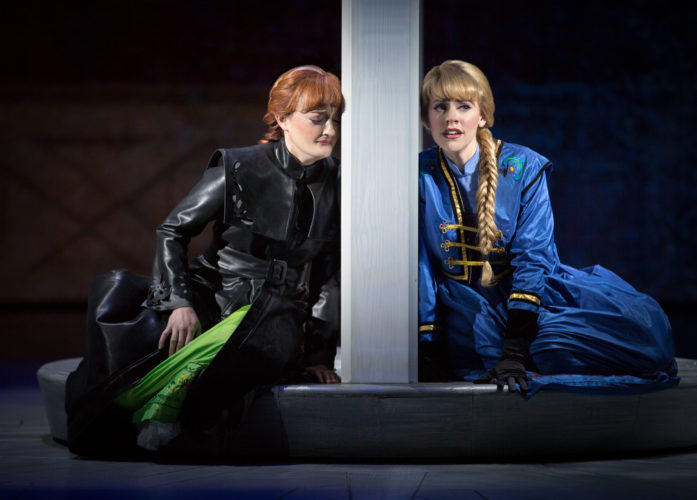 “I am approaching ‘Frozen’ as I would any new work – to search the story for what resonates most emotionally, which is the story of the relationship between Anna and Elsa, their coming of age and conquering their worst fears,” explains Director Tommy. “It’s what made the movie so intensely satisfying and fresh. The theatrical version of ‘Frozen’ that my designers and I are creating for the Hyperion builds on the film’s emotional intensity using beautiful performances, thrilling choreography and the most cutting-edge design elements.”

The animated non-human characters of Sven and Olaf are brought to life by master puppet designer Michael Curry, who co-designed with director Julie Taymor the animal creations of “The Lion King” on Broadway, the magic mirror in “Snow White: An Enchanted Musical” at Fantasyland Theatre, and many other Disney parades, shows and projects, as well as projects for Cirque du Soleil and the Metropolitan Opera. 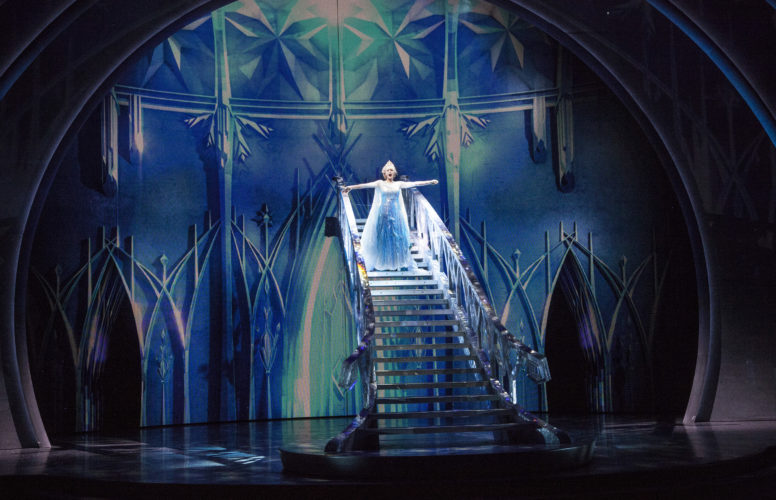 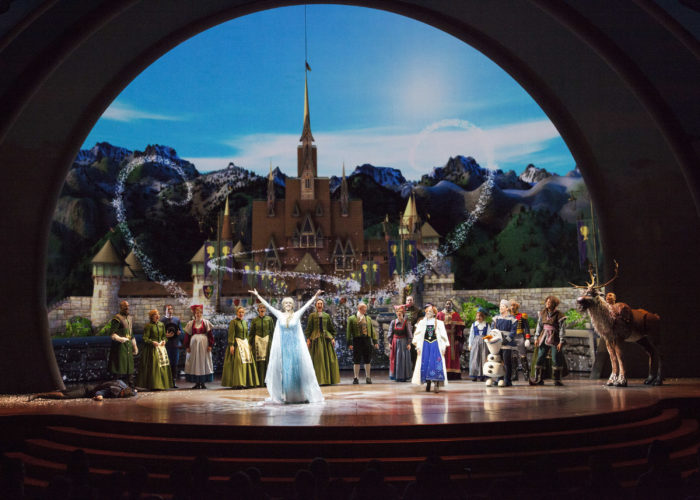 An entirely separate two-act Broadway production of “Frozen” is currently being prepared by Disney Theatrical Productions and is slated to join Disney Theatrical’s New York productions of “Aladdin” and “The Lion King” for spring 2018 at a theater to be announced. It will have a pre-Broadway engagement starting in summer 2017 in Denver.

If you really miss the former occupant of DCA’s Hyperion Theater, you can relive the Aladdin musical spectacular on the Disney Fantasy cruise ship, as seen in this highlights video: