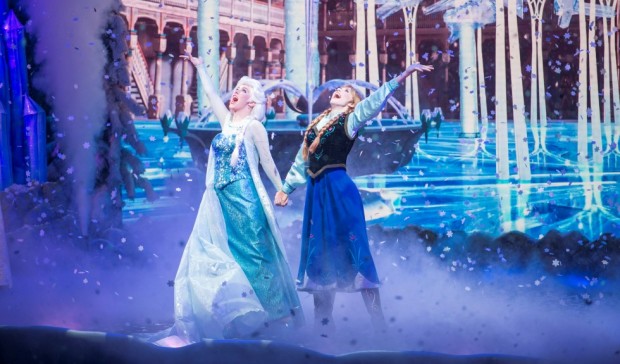 A new musical stage show based on the Disney movie “Frozen” is set to make its way to Disney California Adventure, replacing the Aladdin show inside the Hyperion Theater.

The new Frozen musical is said to show guests the world of the hit film like never before, featuring elaborate sets and costumes, special effects and huge scenic transformations.

From the Disney Parks Blog:

“Our stage production of ‘Frozen’ will stay true to the heart and soul of the film,” says Dana Harrel, Portfolio Creative Entertainment Executive, Walt Disney Imagineering. “Anna and Elsa will carry the audience on an emotional journey that includes show-stopping production numbers and a few unique theatrical twists. We can’t wait for everyone to see it!”

With a new show set to open at the Hyperion Theater, it’s time for Aladdin to make his final wish and set the Genie free, as the cast of the award-winning “Disney’s Aladdin – A Musical Spectacular” prepares to take its final curtain call on January 10, 2016 after nearly 14,000 shows.

“Thanks to our amazing cast and the many, many fans, ‘Disney’s Aladdin – A Musical Spectacular’ has enjoyed a longer run at Disney California Adventure park than we could have ever imagined,” said Kris Theiler, Vice President of Operations for Disney California Adventure park. “Today, we are excited to share more exciting news about another story that will soon come to life for guests at the Hyperion Theater. With larger-than-life musical numbers, wondrous scenery and lovable characters, ‘Frozen’ will begin entertaining guests in 2016.”

Halloween Time returns to Disneyland Resort for a...

Celebrate the 50th anniversary of ‘it’s a...