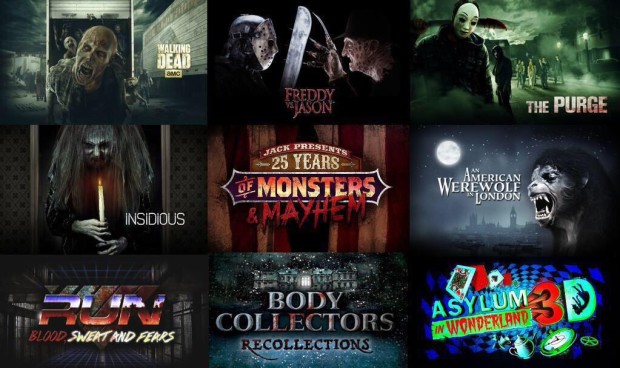 With the event just a few short weeks away, Universal Orlando has unveiled all of the terror awaiting guests during Halloween Horror Nights (HHN) 25.

The most popular house from 2013, An American Warewolf in London, will be returning for an encore at HHN 25. As guests step into John Landis’ landmark 1981 horror classic, they’ll witness the attack on the English moors, the bone-crunching transformation, and more werewolves than ever before.

In addition, other properties include:

• Freddy vs. Jason: From the cursed Camp Crystal Lake to the nightmarish 1428 Elm Street, awake or asleep, you’ll find yourself caught in the middle of this epic battle – where the winner’s reward is YOU.

• Insidious: Enter “The Further” and travel through all three parts of the Insidious saga. Denizens of the afterlife try to find their way back into the world using the living to guide them. The house isn’t haunted – we are.

• The Walking Dead: From the burnt ashes of Terminus, through the flooded community food pantry basement, and into the darkened churchyard, hordes of walkers surround you as you relive gut-wrenching moments of the most recent season.

• The Purge: This year’s Purge is more brutal than ever. From the moment you step inside the house, dozens of vicious vigilantes will descend upon you as they exercise their right to purge.

Four original content houses will be part of the mayhem, they are:

• Jack Presents: 25 Years of Monsters and Mayhem: Relive the most terrifying moments of the past 25 years as Jack releases a catalogue of creatures in one maze. You’ll be attacked by Universal classic monsters, meat-grinding maniacs and the fiends of Horror Nights past. Plus you’ll get to walk through scenes of HHN past, including Forsaken, Nightingales, Gothic, H.R. Bloodengutz and more.

• RUN: Blood, Sweat and Fears: You’ve just been selected as a contestant on RUN, a brutal TV show where everyday people are stalked by skilled assassins, with HellGate Prison as the battleground. Just remember: the more horrifying your death, the higher the ratings.

• Asylum in Wonderland 3D: A new volume of Scary Tales has been released. Follow the white rabbit through the looking glass and into a murderous 3D Wonderland. Is this world all in Alice’s mind or are the images we see real enough to kill us?

• Body Collectors: Recollections: The Body Collectors have returned, descending upon Shadybrook Asylum to collect the human parts they require. Screams echo the hallways as a blizzard rages outside while sharpened blades swirl inside.

Five different scare zones will take over the park, featuring:

• Psychoscareapy: Unleashed: The criminally insane inmates of Shadybrook Asylum have escaped and stumbled upon a Halloween Block party in the streets of New York. They quickly decide they’d kill for some costumes for their very own special costume contest where you will be the judge. Keep an eye out all around, even in the windows of the buildings.

• ICONS: HHN: The eeriest icons and most cadaverous characters of the last 25 years of Halloween Horror Nights have returned. The Caretaker, The Storyteller, The Director, The Usher and more are back to relive every monstrous memory in the streets of Hollywood. Be on the lookout for “special kill moments” as well.

• Evil’s Roots: Your darkest fears will take root amidst the perilous paths of Central Park as you face evil fairies, humanoid bats, scarecrows and more horrors, including a familiar entrance piece.

• All Nite Die-In: Double Feature: The Carey Drive-In movie theatre has been closed for decades after grisly murders during a double feature. It’s lights, camera, carnage as the theater nicknamed “Die-In” by the locals lives up to its name. Depending on the time yo explore this zone, you may see characters in classic black & white or modern color.

In addition to the scare zones, roaming hordes will be lurking around other areas of the park, wielding their infamous chainsaws.

• The Carnage Returns: Jack the Clown is taking Halloween Horror Nights back in a blaze of murderous mayhem with his army of feared followers and his companion in carnage, Chance. The show will take place on a stage across from Mel’s Drive-In. Remember, Jack always has the last laugh.

• Bill and Ted’s Excellent Halloween Adventure: Party on as those two most excellent dudes return to skewer the biggest names in politics, show business and pop culture.