Guest Editorial: One fan’s hope for the Wizarding World of Harry Potter expansion 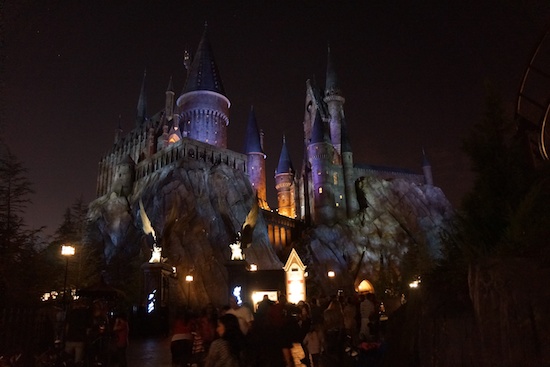 Since Universal has not released any official details or plans for their Wizarding World of Harry Potter expansion, I must start by saying this is all just speculation and dreaming, some based on other rumors. While this post will focus on the rumor that the expansion will be London/Diagon Alley themed, please keep in mind that this has in no way been confirmed.

Also, if the expansion does happen to be London/Diagon Alley, the attractions and shops will greatly depend on the time period it is set in, unless the creative team decides to muddle the time to allow for more attractions. Remember, the return of Voldemort takes away many of our favorite shops, but introduces Fred and George’s new joke shop. This entire article is based on speculation and current rumors, but it goes into what experiences a Harry Potter fan would want to get out of the Wizarding World expansion.

The Leaky Cauldron
This is a must-have restaurant. While it would be illogical to additionally use it as a hotel inside the park, it must maintain the appearance of a hotel with a downstairs pub. 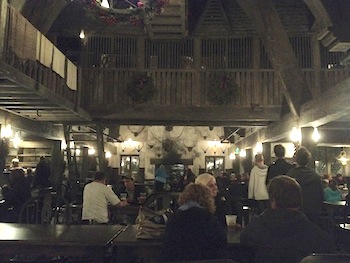 This will be a great opportunity to give us a new version of the Three Broomsticks. They should keep it similar in design, but give it a slightly different atmosphere and new menu options. The problem with the Leaky Cauldron as the entrance to Diagon Alley is that it would be extremely inefficient unless the Universal creative team is able to work their own magic and design something authentic that moves people well. Other than that, it should be very authentic to the books and movies. 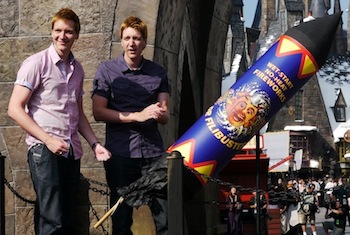 Certain items from Zonko’s should be transferred over for authenticity (like the Pygmy Puffs), but for the most part, this new shop should offer a similar selection to Zonko’s. Hopefully having both of these shops will help with crowd control, but the Weasleys’ shop should still have a new atmosphere. It will need the presence of Fred and George. kind of. An option for this would be to have paintings of the twins up behind the register that are still most of the time, but cycle through jokes and taunts and random laughter. In addition to that, a speaker system through the shop could play recordings of their voices specific to the areas. They could explain certain products, laugh, tell jokes, etc., all in random corners of the shops. To explain the twins’ physical absence from the shop, a simple note could be hung from the door or the painting that states they are “off to visit Charlie in Romania, be back in a week” or “going to see Bill get married!”, etc.

Gringotts Wizarding Bank
This is also a big must and it would make a great roller coaster. Think of the indoor and theming aspects of The Mummy combined with the new HD technology of Spiderman. 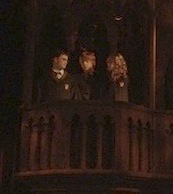 It should be based on the 7th book break in, and should start off with Hermione or someone of the gang explaining the situation, similar to The Forbidden Journey ride. Similarly to The Mummy, it should also start off slow and seem like everything is going just fine, but when the carts go through the disillusionment waterfall, it drops down into a coaster with Goblins popping out around corners trying to catch you, alarms going off and the roar of a dragon in the distance getting louder and louder. It should slow down or stop when it finally meets the dragon, heighten suspense, and then at the last second, everyone gets saved and with a little more coaster time, everyone makes it out of the bank with the horcrux.

Quality Quidditch Supplies
While this has not been mentioned anywhere else, it would be a great idea if a broom riding experience was incorporated into Quality Quidditch Supplies. Upun entrance, it could seem like a regular shop with quidditch and broom supplies, but a sign offering test rides of the newest broom would lead guests into a back room with quidditch simulation games. Guests could be seated on a quasi-broomstick in front of/surrounded by screens and play short games where they have to follow the snitch or hit a series of quaffles with their broom. 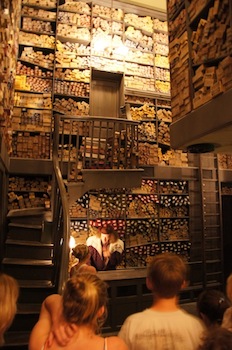 Many have said that this will be moved to the London area for authenticity purposes, and this should allow Universal to make a better version. Complaints about the quality of the Hogsmeade version should lead to this one having a much higher efficiency and wow factor.

Florean Fortescue’s Ice Cream Parlor
This could be a great opportunity for Universal to create a one-of-a-kind ice cream experience, but not if they are going for complete accuracy as both Florean Fortescue’s and Weasleys’ Wizard Wheezes are not open at the same time in the books. If they do choose to put this shop in, it would be a great sit-down parlor with a wide variety of flavors and a few specialty ice creams. Since the actual shop is not described in great detail, it could go in many creative directions and could become a great and unique experience. For accuracy, though, they must have an outdoor seating area, as Harry used to sit outside the shop and do homework.

Flourish and Blotts
While this is a very important shop in the books, it would be very hard to do an entire Harry Potter bookshop. Obviously, the Harry Potter series could be sold there in special editions, but school textbooks would be much harder because someone would have to write them in a short time. This definitely should be represented, but maybe just for show? Or maybe the inside could be used for an air conditioned seating area and lead to restrooms?

Madam Malkin’s Robes for All Occasions 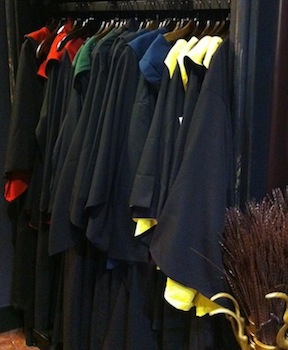 This would be a great clothing shop addition to the area. It could sell robes and school uniforms as well as themed T-shirts and accessories. A possible side addition to this would be to attach Madam Primpernelle’s Beautifying Potions to the side and have a small array of Harry Potter themed beauty products.

Eeylops Owl Emporium
This could be just a storefront, or it could serve a similar purpose as its Hogsmeade equivalent: to send actual mail. It should definitely not be left out, as it is where Hedwig was bought, and therefore extremely important to Harry.

Secondhand Shops
This is a possibility for a sales/clearance shop. In the books, the Weasleys mostly get their items from a various array of secondhand shops in Diagon Alley. These shops could be linked together to form a sale or clearance area that is open for special sales and promotions throughout the year. Otherwise, these could just be more themed storefronts along the street. 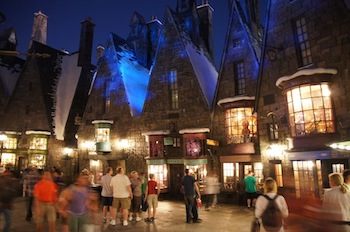 • Magical Menagerie would be hard to include as a shop you could enter, as it only sells pets and pet supplies, but it would be a great storefront to be included in the theming. Maybe they could even put a Crookshanks in the window?
• Potage’s Cauldron Shop is too specific to be a real shop included in the area, but it would still make a great storefront!
• The same goes for Slug & Jiggers Apothecary. There’s no point in including the products, but the storefront should be represented.

Stay tuned to Orlando Attractions Magazine for all the full details about the expansion when they are released.

Isnt it possible it won’t be potter at all? Or has that been confirmed?

Great write! But I hope that Gringotts Wizarding Bank ride will not be a coaster clone like Mummy. They would be to simular and to close and I wouldn´t be able to ride it. I hope for a spectacular darkride with a bit of Spiderman in it (or a lot). It would open up to more riders and I think little kids need a gentel ride for them to.

It has been confirmed that there will be a “significant” expansion to the Wizarding World, but it hasn’t been confirmed where and no official details have been given.

I thought a Transformer ride was moving in?

I have annuals and think Harry potter ride is cool but expand it there not the old amity . I have never seen a Harry Potter movie and probably won’t anytime soon. Universal needs variety Please bring Transformers here or something else and expand Potter in Wizarding area which would make a better fit . Too much of one thing in multiple parks can backfire down the road and create over saturation

over saturation? highly doubtful since harry potter is hugely popular. i feel bad for you having never seen a harry potter movie, get with the program