Guest Editorial: The closure of The Great Movie Ride is the end of an era in Disney themeing 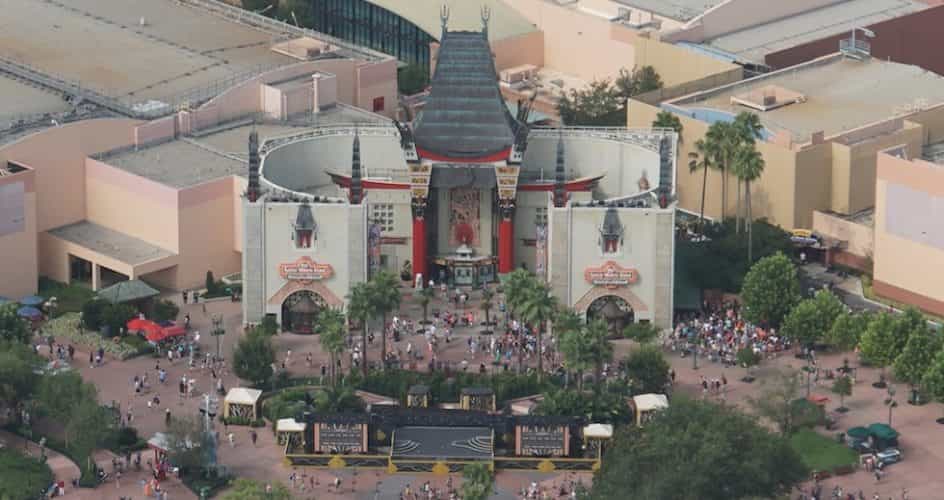 The entrance to The Great Movie Ride at Disney’s Hollywood Studios. Photos by Don Gworek.

After 28 glorious years of operation, Disney is shuttering the doors of the attraction that once defined the beauty and spectacle of Disney-MGM Studios. As the park’s only remaining opening day attraction, The Great Movie Ride will perform its final run today, Aug. 13, 2017. The closure of The Great Movie Ride is saddening, not only because it’s a wonderful attraction that perfectly executes the theme of the park, but because its closure means the end of the theme the very park was built on for nearly 30 years. The Great Movie Ride was so much more than just a ride, it was what held everything together within the park, and with its closure, everything we associate with the park’s theme needs to be called into question.

The park once known as Disney-MGM Studios, and now known as Disney’s Hollywood Studios, has been shedding its “studio” theme for quite some time. The park is no longer a working studio as it once was, as there are no films or television series currently filming there. In addition, the park no longer provides contributions to Disney’s animated projects, as actual animators were removed from The Magic of Disney Animation attraction years before it closed down entirely in 2015. Even more so, Disney has gone so far as to omit everything else that resembled the original studio theme, including the Backlot Tour, the Streets of America, and Lights, Motors, Action! Extreme Stunt Show. Above all this however, was the park’s defining attraction, The Great Movie Ride, which helped maintain the idea that this park was a celebration of the movies, and the golden era of Hollywood, or as former Disney CEO, Michael Eisner once described it, “a Hollywood that never was, and always will be”.

Without it, it’s quite unclear what the underlying theme is tying together franchises like Star Wars, The Muppets and Toy Story. But it seems the park has gone from one that celebrates movies by taking you through the collaborative behind-the-scenes process of your favorite films, to one that simply immerses you inside those specific films. The park is certainly shining a light on the “movies” aspect of it, but the resort’s management is confusing the park as one that simply features your favorite movies, and one that celebrates the collaborative process and the hard work that goes into producing that movie magic. Disney’s Hollywood Studios has been Walt Disney World’s black sheep for several years now, but without a single attraction containing the former theme of the park, not to mention not a single attraction left from the park’s opening day, the future of the park is quite uncertain.

The near future of Disney’s Hollywood Studios is anything but dull. Disney is well into their multi-billion dollar, 14-acre-wide Star Wars themed area, set to open in 2019, and the upcoming Toy Story Land, which opens next summer, not to mention the new Mickey-themed attraction, Mickey and Minnie’s Runaway Railway, which is replacing The Great Movie Ride. The only issue is, Walt Disney World is now faced with the challenge of redefining the theme underlying the entire park; one that’s gone from being about the celebration of cinema to solely being a location in which Disney can incorporate synergy within their most popular franchises. Two years ago, Disney CEO Bob Iger let slip that “Disney’s Hollywood Studios” will likely receive another name change; likely to omit the “Hollywood” or “studio” aspect of the park. Disney fans are divisive over the legacy Iger will leave the Disney Parks and Resorts upon his departure, many claiming he has done little to upkeep the “themes” of each park, such as placing intellectual properties in areas that detract from the theme, such as Guardians of the Galaxy in Epcot, a park dedicated to human innovation and culture. Another, is the instance of the Guardians attraction in Disney’s California Adventure, which now sees an intergalactic space port right in the middle of the golden era of Hollywood’s Buena Vista Street.

At Disney, theme and story have, and always will, be the most important factors in which the Imagineering team chooses to create their attractions. Sometimes however, this importance is blindsided and it causes the loss of great attractions that detract from the story these parks once set out to tell. While we’re certainly going to keep enjoying the Disney theme parks, and we’re very likely to enjoy Mickey and Minnie’s Runaway Railway, the hollow feeling left by The Great Movie Ride will not only leave us disappointed at the loss of the pinnacle of great dark-ride attractions, but it’s something that will ultimately redefine the park as we know it. As they say in Hollywood … that’s a wrap.

• Mitchell Stein is the owner and operator of the Disney fan-site The Mickey Mindset, which is dedicated to celebrating all things pertaining to The Walt Disney Company’s films and properties. You can find The Mickey Mindset on Facebook or by following @MickeyMindset on Twitter.

Crossroads shopping center near Disney World to be...

Sorcerers of the Magic Kingdom game shutting down...

Sleuths dinner theater closes its doors for the...

I’m not sure how this ride “… perfectly executes the theme of the park”.
THe parks has always been a hybrid with a working studio (barely true plus rides/shows) explaining how movies are made), music (slapped on R&R), riding the movies/television (ToT) and shows who (besides Indy) has nothing to do with making movies. Star Tours exterior (movie set) never matched the inside (you fly through a best off Star Wars movie sequences), The Great Movie ride (a collection of stages portraying a scene from a hand full of movies with commentary/and “acting” to put you in or out of the movie) and the Toy Story Wii shooter where again the outside (Pixar Studios) doesn’t match the “you are shrunk to a toy and shoot stuff” story. The Muppets is just a muppet 4D ride not matching any theme.

I don’t mind the changes. We are getting another Disney ip park to sell their products and cross promote their movies (as any Disney park does). Epcot is going the same route so we get more of the same spread over 4 parks and with the success of MK you can’t blame Disney for doing that.

The Great Movie Ride is my favorite ruse at Hollywood Studios! Can’t believe this ruse is closing. Very sad and disappointed! :- (

Muppets is not a 4d ride it’s a show that does match. It is a sound stage studio that is gearing up for a production when something goes wrong in the lab. Everything in the original park was considered to be a sound stage. Later attractions on sunset blvd changed that focus. Toy story used to be who wants to be a millionaire.

While you certainly are bringing up some very good points, this article is nowhere near what I expected.
To me it is more important that this was the last attraction made that had a significant number of human audio-animatronics in it…

The real question to me is who is pushing this change to Disney Parks?? Is it management forcing it on the consumer/park guest?? Or is it the park guest/consumer telling Disney this is what they want?? I honestly believe it’s a combination, with the consumer playing the larger part.

I think this is a great article, yet I find myself on the other side. Hollywood Studios is now a park that celebrate franchises. That’s it. And to be honest, a park that has as the main event an attraction that is “old and lacks disney’s ips” doesn’t sound good to me. We need the big mouse to celebrate the triumph of this company.

I understand what the concept legacy means, but this shouldn’t force us to stay attached to attractions that young ones and maybe a few adults find boring. The new mickey ride will stay as the main pillar of the park. Imagineers can’t let us down when it is all about the mouse. We’ll be better with that addition. Way better.

This ride defined DHS for me and my family since day one. I was simply amazed at this ride, and wanted to back to Disney asap because of the need to see this ride again. It will be better but it will never be the same…..

when you think of the amount of money and work (animatronics!!) that went into that ride, i highly doubt we’ll get a fraction of that effort into the mickey minnie ride. hope i’m wrong, but too many overall changes that seem based on greed more than any careful thought. the hodgepodge design of guardians of the galaxy at disneyland is an embarrassment.

Excellent article, and I couldn’t agree more. Hollywood Studios used to be about the magic behind the movies, in a way that was wonderfully entertaining. For me it was always a trip back in time to the golden age of Hollywood, from rides like the Great Movie Ride and the Backlot Tour, to the theme of the shops and restaurants, to the great street performers that were “filming” on Sunset Blvd. Now it has become just another Disney theme park, having lost its raison d’être. I know my family and I will love what’s to come, but if I had my choice I’d take the magic of Disney’s Hollywood over the modern standard theme park formula.

Thank you for the kind words on the article. I understand your frustration in the future of the park, because I share those sentiments. I dislike that the theme has become so confusing and the park no longer celebrates what it once did. I’m sure the future will be impressive, but it will lack the glory it once had.

Completely agree with Bob B. Any idea if they are leaving the Chinese Theatre front? If not then article really nails it as to me it was the center theme of the park just like the castle, ball and tree in the other parks (I never liked Mickey’s Hat)

Of course I will still go to park unless they ever decide to change the Twilight Zone Tower of Terror. When that day comes I will go to Universal for 3 days instead of 2

Hope someone from Disney reads these posts……..

How about this for the new name: “Disney’s Universal Studios.”

I’m sure the lawyers will have a field day!

That ride was so unique, it was one of my favorites. Unfortunately, my other favorite is gone too, the universe of energy. I’m all for change, but do they have to keep taking away the really good attractions? It seems like the studios are going to be almost all star wars…..and I’m a trekkie.

Right there with ya. Loved both these attractions, but it made sense that Ellen surpassed it’s time. As for The Great Movie Ride, I’m all for updating it, and adding new films or updating the sequences, I just don’t enjoy the idea of removing the essence of the attraction from the park. It certainly leaves the park at a great theme loss.