Guest Editorial: When Pleasure left the Island at Downtown Disney 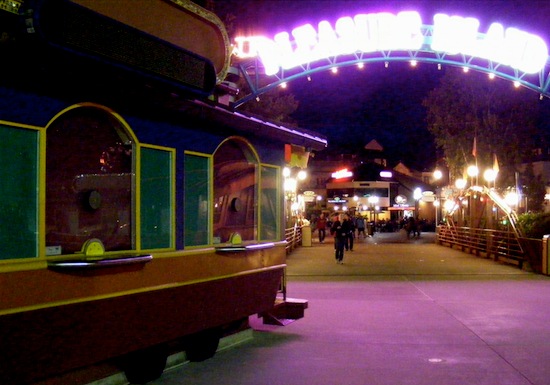 Editor’s Note: We print Letters to the Editor in our print version, but that allows us only limited space. So from time to time, when we receive letters that are too long and have too much information to edit down, we’ll be posting them here as guest editorials. These letters are the opinions of the authors. We always welcome your photos and letters, short and long. Submit yours Here.

I recently found myself at Downtown Disney’s West Side for a concert at House of Blues. At the end of the night I decided to take a walk down memory lane. When I was 17 to 18 years old I worked for Pleasure Island Outdoor Foods. It’s been some time since I’ve returned to the island where I spent so much time as a youth making a small living, learning about alcohol and trying to sneak into Mannequins, so I thought a stroll through the (now closed) island would be fun.

Pleasure Island in its heyday consisted of seven nightclubs on a massive island. You would pay an admission price (often near $20) and gain access to all of the clubs, the party atmosphere of the island itself and an “every night is New Years Eve” show on the West End Stage.

When you approached Pleasure Island from the Marketplace side of Downtown Disney you would purchase a ticket at one of the two train car ticket booths (renovated from the former Fort Wilderness railroad) and proceed across the bridge to the turnstiles where you would find yourself in the shadow of the behemoth Mannequins Dance Palace. 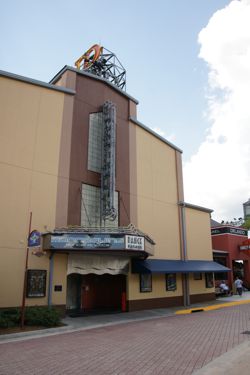 Mannequins was a gigantic state of the art nightclub complete with a round spinning dance floor and multiple levels of tables, sofas and various places to congregate with friends, or look for love on a night out. The building now sits empty with its marquee still towering over the street.

Walk straight ahead and you would pass the P.I. Live “radio station” where DJs hosted a nightly street party in front of the Hub Stage. Several times a night the Pleasure Island dancers would hit the stage and perform to high energy dance and pop music. The stage is now a gaping hole complete with boat dock. The dock lies at the end of a sidewalk that separates the new Paradiso 37 restaurant, and the former Rock n’ Roll Beach Club.

Rock n’ Roll Beach Club was a favorite among locals. You could catch a live band playing covers practically every night and goofy DJs playing rock n’ roll hits in between sets. Right next door was Motion (its final of many identities), a club that catered to a younger crowd and played primarily top 40 hits. It’s now completely inaccessible thanks to a “wall” of bushes placed in front of the entrance.

Walking up the crowded street you would begin to hear songs you remembered from the ’70s and ’80s pumping out the painted double doors that lead to 8Trax. Like an escape into an Austin Powers movie, this club did the disco era right all the way down to the mirror balls, fog machines and lighted block flooring. The building is still painted in bright disco hues but the trademark “8Trax” sign is now painted over and the club sits vacant. 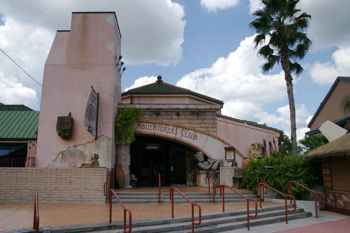 Across the street is a curious looking building that almost dared you to come in and check it out. The Adventurers Club was themed to resemble a 1930s style British explorers club complete with talking artifacts on the walls and a cast of improv actors portraying a wild group of characters that seemed to get more hilarious every night. The building is still standing with its Adventurers Club flag flying high. The arched stone sign still marks the entrance of another one-of a-kind Disney experience reduced to a festering empty building.

On a busy night you would often find yourself at The West End Stage (topped by a giant neon Jessica Rabbit) at midnight for the New Year’s Eve countdown show and fireworks, or catching Frankie and the West End Boys blasting some of your favorite songs in full concert sound. However, the West End Stage is no more. Instead, all that remains is a pedestrian bridge to Downtown Disney’s West Side.

After that you might be off for a night of dancing in the hottest in hip-hop and R&B at the BET Soundstage Club. Originally the Neon Armadillo (1989-1998), catering to a country crowd, the BET Soundstage Club became a staple in the local hip-hop community. The building still says “Soundstage Club” but obvious scars remain from where BET removed their logos from the signs. No doubt in hopes that their name would not sit on the outside of a dilapidated building for years to come. 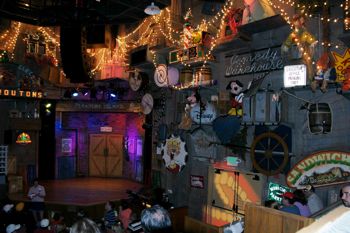 I’ve saved my personal favorite club for last because it was often my last stop after a night of partying with friends at Pleasure Island. Comedy Warehouse was the best improv comedy club in Orlando. A troupe of very talented improv comedians hosted the show several times nightly and you never got the same show twice. It was the Orlando equivalent of having “Whose line is it anyway?” every night at Pleasure Island, and the 12:05 a.m. show was always (in my opinion) the most entertaining. The building now sits empty with cafe tables and another “wall” of bushes completely obstructing the view of the door to one of the coolest places on Disney property.

Several of the cast of the Comedy Warehouse are still working at Walt Disney World. The pianist from the show is working at the Rose & Crown at Epcot’s UK pavilion, and several of the actors and actresses perform daily in Epcot’s Innoventions West at SlapStick Studios, or as one cast member refers to it, “The Velcro Show.”

The Walt Disney Company announced in June of 2008, that it would close the doors of the beloved nightspots for the last time on Sept. 27, 2008, to make room for more “family friendly experiences” in the form of more shops and restaurants.

As a child I remember Disney being the masters of closing an attraction and making it completely disappear so that it all looked like a purposeful “part of the show.” In my walk through Pleasure Island, I saw a place that has become nothing more than a waste of acreage and a very visible example of a poor decision to close an iconic part of Walt Disney World.

Pleasure Island was one of, if not the most popular nightspot in Central Florida from 1989 to 2008. It showed that Disney had a side that didn’t take itself too seriously to have a good time. It’s almost haunting to remember the complex that is now a hollow shell of its former glory. The nights of dancing until 2 a.m. with friends and family, “cast member night” on Thursdays and knowing that you could go to Pleasure Island any night of the year, wipe the slate clean, and countdown to a new year all over again.

As I exited a nearly empty Pleasure Island at 11:30 p.m. I saw a sign that proclaimed, “It just gets better!” I found myself thinking, “Really? When?” The closure of Pleasure Island to make room for more “family friendly” money making opportunities marked the end of an era at Walt Disney World; an era where the adults were part of the “family” too.

Got talent? Show it off during 'America's Got Talent' auditions this weekend at the Universal Orlando Resort

Well stated. Let’s not forget the PI Jazz Club (I miss the Toxic Audio shows) or that Rock-N-Roll Beach Club actually started out as a roller rink (or that 8Traxx was originally the Cage). . .

PLEASE bring back the Adventure Disney! (Right now the Downtown Disney are is VERY depressing – with all the closed clubs and stores)

the article fails to mention that the family friendly restaurants and shopping we were promised have yet to arrive, more than a year after the island closed. And they aren’t coming any time soon. There is zero construction going on.
As the article mentions, for all intents and purposes, Pleasure Island is in fact, Closed.
It’s a shell, a worn out husk of what it was and could have still been.

On many nights, a DJ and some dancers come out and play music and try to gather pedestrians walking past and whip them up into an outdoor dance party. This of course has to make you wonder: if Disney wanted to gather people together and give them a place to dance… why not have them do it INSIDE THE MULTIPLE DANCE CLUBS THAT ARE SITTING EMPTY??

As you can imagine, on a rainy night, Pleasure Island is a graveyard… absolutely deserted. Again, why not open a dance club, give people a place to escape the rain, and serve them over-priced beverages?

Very well said!!!! I couldn’t agree more with your statements. I miss the Adventurers Club terribly. I find it very depressing to go to Downtown Disney remembering what once was…We’ve cut back on the number of trips to Disney because of this. We’ve searched for other things to do outside of Disney, so our dollars are spent elsewhere. If Disney saw this as a way to bring more money in they were very wrong!!! T-Rex, make your own t-shirt shops etc…do not build memories that keep people coming back…I can shop & go to restaurants anywhere…but the Comedy Club & Adventurers Club were unique to Disney….bad choice, but hey the one positive is it’s gotten us to look outside of Disney for our entertainment….take that to your accountant!

Lets not also forget that Pleasure Island was such as great hit and such a success that Universal Studios copied it with City Walk to try to steal some of that business, and in my opinion, City Walk wasn’t even close to what DownTown Disney used to be

I’m glad you all like the article. It means the world to me that people are getting an opportunity to read my work. Thanks to Matt and the team at Orlando Attractions Magazine! Check out my blog at christopherbeale.wordpress.com for more of my writing, and thanks again!

Some great posts above.
My wife and I had always traveled to Orlando several times a year. we loved to Dance and have a good time at PI
Due to the closing of PI we now head to KeyWest and only travel to Orlando once a year . we never visit any Disney property anymore and never will again.
I understand the familly entertainment side of thigs, but could they not leave a small part for the adults to have some fun.
Once again Disney only could see the dollar signs per square foot or at least thought they could.
PI is now a defunt dust bowl and the executive team that made the decision to close PI should be fired.
But once again it is never to late to do the right thing, but until Disney goes through a few years of declining revenue I suspect they will keep to there guns on this one.

I wish they would bring back the Comedy Warehouse! We miss it so much!!!!!!!!

Please teach the rest of these internet hoolignas how to write and research!