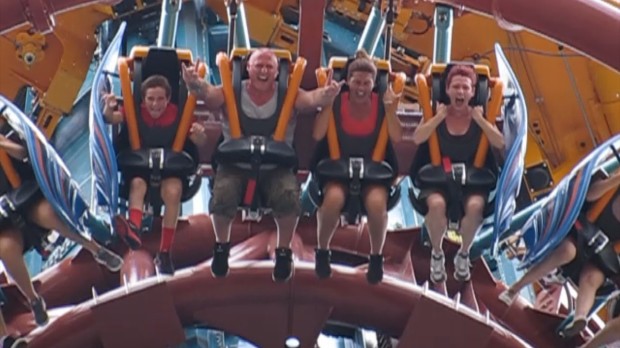 With Falcon’s Fury now open at Busch Gardens Tampa, we thought we’d put together a fun video to show off the riders’ Falcon Faces.

Busch Gardens is asking park visitors to post photos of their #FalconFace on social media, basically what they would look like diving through the air face-down from 335 feet in the air. We took our slow motion camera to the park to record guests’ reactions while on the ride.

Falcon’s Fury stands at 335 feet and takes riders soaring 60 mph straight down. At the ride’s highest point, Busch Gardens has added an element of surprise; like its bird of prey namesake, riders pivot 90 degrees in midair to a face-down dive position. An instant later, riders plunge with speed and power that they’ve never experienced before.

To see the #FalconFace of our hosts of Orlando Attractions Magazine: The Show, be sure to watch the Sept. 11, 2014 episode below:

To get a sense of what it looks like to drop face-down from 335 feet in the air, take a look at this video done during testing for the ride:

As Dreamers Do – The Revolutionary Food...