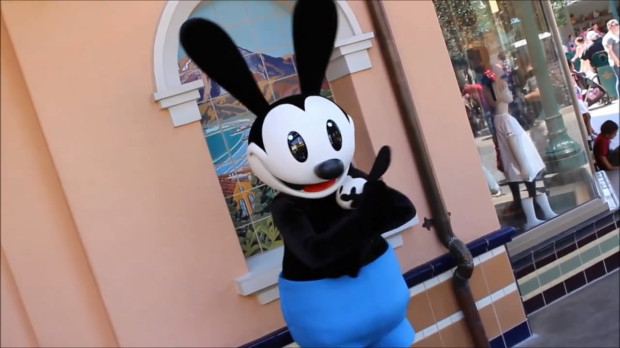 One of Walt Disney’s first cartoon creations has made his U.S. Disney Parks debut this past weekend at the Disneyland Resort.

Oswald the Lucky Rabbit is now meeting guests on Buena Vista Street at Disney California Adventure, near the gift shop that bears his name. Guests can meet Oswald daily from park opening until 7 p.m.

Considered Walt Disney’s first cartoon creation before Mickey Mouse, the character of Oswald was taken over by Universal in 1928. 78 years later, in 2006, Disney CEO Bob Iger worked a deal with Universal to acquire all rights to Oswald in exchange for the contract of sportscaster Al Michaels. The first major reappearance of Oswald after the deal would be in the Epic Mickey video game series.

This isn’t his first Disney park visit though, as he first started appearing in April 2014 at Tokyo DisneySea in Japan: