Halloween Horror Nights 18 premiered at Universal Studios Orlando last night on September 26, 2008. As we’ve mentioned in the past, this year’s icon is a character by the name of Bloody Mary, based off of urban legends surrounding a mysterious woman who would manifest herself if you were to speak her name three times into a mirror.

Universal has been billing this year’s event as their biggest ever and I’d have to agree. With eight extremely detailed houses and six wonderfully crafted scare zones (plus several stage shows), there is more to see than is even possible in a single night.

Before I get to my scare-by-scare review, here’s a video of the special opening presentation given to the media introducing Bloody Mary.

And don’t miss our photo gallery from Halloween Horror Nights 18. 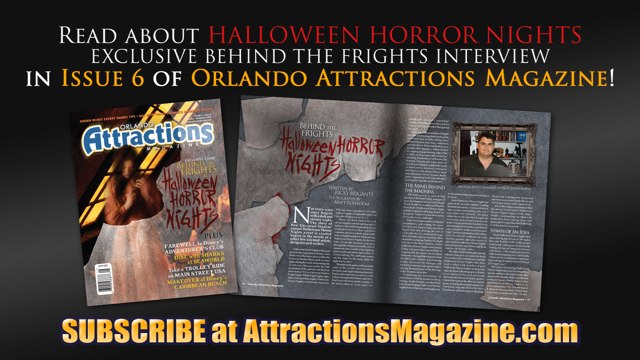 Issue 6 is available for pre-order today. It will be released on October 1 so if you subscribe today it will be your first issue!

Below are some spoiler-free thoughts on each of this year’s haunted houses, ranked in order from best to worst (in my opinion, of course).

1. Scary Tales – Once Upon a Nightmare
Scare Factor: 7/10
Entertainment Factor: 9/10
This house is meant to bring classic fairy tales to life in a gruesome way and it does just that. From Little Red Riding Hood to Goldilocks and the Three Bears, the twisted variations of these classic tales are wonderfully horrendous. The house is packed with visuals and is longer than your average haunted maze. I only wish it had been a little bit brighter in some scenes so I could better take in all of the detail.

2. Dead Exposure
Scare Factor: 9/10
Entertainment Factor: 7/10
You do not want to miss Dead Exposure. Period. The premise is that you’re in the world of a photographer who has stumbled upon an outbreak of zombies… and you’re stepping into his black and white photographs. It’s the most unique of all the houses as it is pitch black inside, with occasional strobes of blacklight illuminating your way, providing you only with a quick “picture” of what’s around you. A constant droning sound gets your heart racing and you never know where the next scare is coming from.

3. Reflections of Fear
Scare Factor: 5/10
Entertainment Factor: 7/10
I expected the icon house featuring Bloody Mary to top the list but ultimately it falls a little short, though still hugely entertaining. While it contains some of the most interesting scenes out of this year’s houses, actual contact with a scary version of Bloody Mary happens less often than I had hoped for. She’s there, but usually not scary. There are far fewer shattering mirrors and much less gore than I anticipated. I suppose I can chalk this one up to my expectations being too high.

4. Body Collectors – Collections of the Past
Scare Factor: 7/10
Entertainment Factor: 7/10
We had a chance to tour Body Collectors a couple of weeks ago while preparing for our cover story for Issue 6 of Orlando Attractions Magazine, so I knew what to expect… and this house delivered on all expectations. The “body collectors” themselves have one goal and that is to, well, collect bodies. This house has a few of the more gruesome moments of this year’s event and the “gentlemen” characters seem to pop out behind every corner. The centuries-old London setting makes for a fun experience.

5. Interstellar Terror
Scare Factor: 7/10
Entertainment Factor: 7/10
Like Body Collectors, we had previously toured this house with the work lights on and no scareactors present. It’s a very different experience during Halloween Horror Nights. The house’s story surrounds a spaceship whose crew has gone insane due to a strange artifact being broad aboard. The environment does make you feel that you’re aboard a spaceship and the crew definitely does their job of scaring quite regularly, often with different gags than found in other houses. Many unique effects and special rooms make Interstellar Terror a must-see.

6. “Creatures”
Scare Factor: 4/10
Entertainment Factor: 7/10
Every year, one house brings a sense of humor to Halloween Horror Nights and Creatures is that house this year. Unfortunately, the ’50s sci-fi movie meets hillbillies theme is too heavy on the hillbillies and doesn’t focus enough on the house’s namesake: the creatures. While shotgun-toting rednecks are enjoyable throughout, most of the action happens out of sight through sound effects. However, this was one of the few houses that got a good scare out of me via misdirection.

7. The Hallow
Scare Factor: 2/10
Entertainment Factor: 3/10
The story behind the basics of Halloween is what The Hallow is supposed to be about. The musty smell of dust in the air adds a unique ambience to the house but beyond that, the house is too dark to see much of anything. I didn’t see any story elements at any point while walking through the maze and the scares are limited, if present at all. Overall, slightly entertaining but not worth a long wait.

8. Doomsday
Scare Factor: 3/10
Entertainment Factor: 2/10
If you haven’t seen the recent film Doomsday (which I haven’t), you’ll be completely baffled as to what’s going on inside this house. I received an explanation of the plot prior to going inside and the house still didn’t make a whole lot of sense. The house is very short and the scareactors didn’t seem like they wanted to scare anyone, but instead just stand around.

Tips for Halloween Horror Nights 18
1. Keep an eye out for a some unexpected and sometimes amazing appearances of Bloody Mary in haunted houses other than Reflections of Fear. I actually enjoyed seeing her in one other house more than I did in her own (but I won’t ruin the surprise here).

2. If you’re running short on time and have to choose between seeing this year’s Bill and Ted’s Excellent Halloween Adventure and fitting in a few more houses, go for the houses. Bill and Ted’s show is not as funny as it has been in the past and some of the houses are more entertaining than ever before.

3. Make sure you experience all six scare zones at night. They are incredible this year and rival what goes on inside the haunted mazes.

I’ll have another post coming up later today ranking the six scare zones of Halloween Horror Nights 18, including pictures and video.

Be sure to pick up a copy of Issue 6 of Orlando Attractions Magazine to read all about the making of Halloween Horror Nights, including an exclusive interview with show director/writer Michael Roddy and some additional fun items to look for while wandering through the houses. The issue is available now for pre-order right here.

Wheel of Fortune tryouts this weekend at SeaWorld

Thanks for the detailed review…could you give an idea how the crowds were? Would you recommend going on opening weekend? I’m going to the Orlando HHN, but also in L.A., wondering if opening weekends at these affairs are better or worse than the second week for crowds…

The longest wait time we saw on opening night was for the icon house, Reflections of Fear, and that was up to 75 minutes. However, by the end of the night, many of the houses were down to 15-20 minute waits.

The lines will get increasingly longer as we get closer to Halloween. The second week should be a good time to go.

Step into the Wizarding World with ‘Harry...