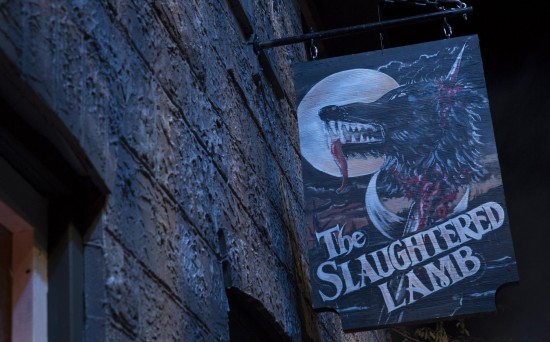 In partnership with the film’s writer and director, John Landis, Universal Orlando’s Entertainment team plans to create a disturbingly-real haunted house experience that pays homage to one of the best lycanthropic stories ever told, “An American Werewolf in London.”

The iconic film follows two American college students, Jack and David, as they backpack across the moors of England. On a misty, full-moon night, the men are attacked by a supernatural creature that kills Jack and taints David with its horrific curse. When the full moon rises again, the killing spree continues, and this time, the blood is on David’s hands.

Beginning Sept. 20, guests will step inside the film and experience a retelling of the horror classic – from the attack on the English moors to the hospital nightmares, to witnessing the bone-crunching transformation of David from human to bloodthirsty werewolf. Guests will encounter David’s vicious werewolf form as he wreaks bloody chaos through London’s subway tunnel, Piccadilly Circus and more.

“It’s terrific that guests will be able to actually experience some of the scarier scenes from the film,” said John Landis, writer and director of “An American Werewolf in London.” “I had fun working with the Universal team to bring one of my more insane movies to life.”

“’An American Werewolf in London’ is a must-see for any true horror fan,” said Mike Aiello, creative director for Universal Orlando’s Halloween Horror Nights. “The haunted maze mirrors John Landis’ horrifying story and having him work with us in the creative process was really the only way this could authentically come to life.”

Out Of The Loop: Banshee roller coaster announced at Kings Island for 2014

if I were going, I will walk through this