I’m telling you, It’s more than a little weird to get these types of calls with no identification as to who was calling. I had my suspicions but until I checked the number and saw it came from Universal’s Press Relations department, I was a little worried.

Then today a package arrived via Fed-Ex. Imagine my surprise when I opened it and found this… 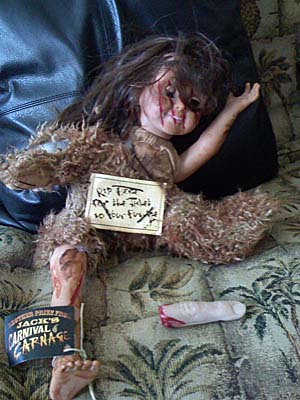 A severed finger and a bloody, cut up, half doll half bear girl.
The tag on her leg reads, “Another prize from Jack’s Carnival of Carnage.” When I ripped the tag over her stomach off, inside was a crumbled up note asking if I liked my phone calls from Jason, Leatherface and Freddy. All of whom will be at this year’s Halloween Horror Nights for the first time. The note also claims this year’s event will be the grisliest, goriest, gut-rippin’est Halloween ever.

We’ll be at the opening night tomorrow night and should have some preview video online over the weekend. Check the Videos section of our magazine site. That is, if we make it back alive.

Much interest in all aspects of the magazine

I guess this means you guys are considered press now!

wow, you guys have only been online for less than a motnh and your already official

Sorry the video isn’t online yet. It was a very busy weekend for us with this, the NFFC events, various interviews with some Disney legends and Epcot’s 25th.