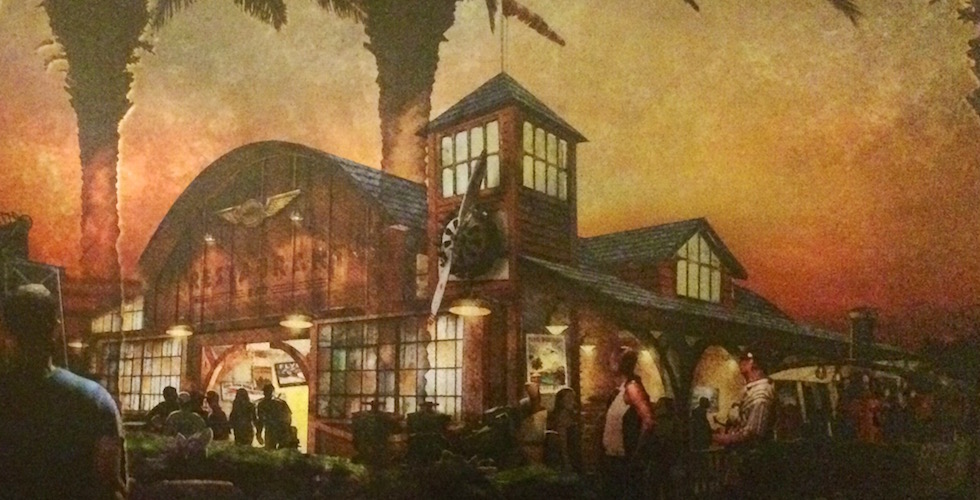 A new bar is being built next to The Boathouse at Downtown Disney. While we’ve known from the concept art that it would be themed to an airplane hanger, we now know it will specifically be themed to Jock Lindsey, the pilot from the “Indiana Jones” movies. 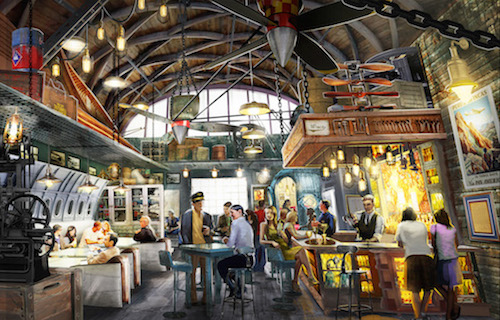 “The Hangar” will open this fall and feature unique drinks and appetizers. The aviation-themed decor will include propeller fans, travel posters and letters written to and from Jock and Indiana Jones. Like the popular Trader Sam’s Grog Grotto at Disney’s Polynesian Village Resort, The Hanger will also feature surprise interactive moments.

Darcy Clark from the Disney Parks Blog has supplied a few more details:

With a prime location along Lake Buena Vista and seating for 150, the venue will feature unique cocktails – such as the “Hovito Mojito” with Barsol Quebranta Pisco, fresh lime juice and simple syrup – and small plates such as “Air Pirates Everything Pretzels” with house-made mustard and beer cheese fondue.

The design team has gone to great lengths to ensure that every element – from the propeller-based ceiling fans and diving bell “booth” to the “Rolling Boulder Meatballs” on the menu – fits within the storyline.

Ardent fans of the “Indiana Jones” films may recognize Jock Lindsey as Indy’s frequent pilot; he’s also the owner of a pet snake named Reggie – an important detail, trust me on this! … Guests can eat, drink and be merry outside as well, in Jocks’ old steamboat, now in permanent dry dock and aptly named “Reggie;” and in nearby seating on the adjacent deck.

Stay tuned as more details are received closer to the opening.

Details on the ‘Coolest Summer Ever’ 24-hour event at Magic Kingdom, including Disney Channel stars

Magic City Mayhem: Back on Location – Epcot, Nemo and more

Wow, I realy, realy hate that. It’s typical for Disney to make a backstory that goes like “this is the bar of Indies pilot” and to make their point they slap plane parts everywhere in idiotic ways. Then they gut the so called hanger to put a bar and searing in there again everywhere slapped plain parts on with no reason what so ever.

They did the same with Beauty and the Beast. Look at the beast castle, we gutted it and put a restaurant in there, that is just stupid and makes no sence. I’m sure Walt is roling in his cryo chamber…

That’s the whole point to a ‘themed’ bar/restaurant. It has a story and decor to evoke a particular feeling. Why do you think THEME parks got that designation?

I can’t wait to see how the imagineers work their magic!

Get over it , or become a castmiaber and work to make WDW the best it can be.
If Walt is rolling it’s because of a all the Starbucks that have taken over WDW.
And the the fact that the history park that he really wanted to do never got done