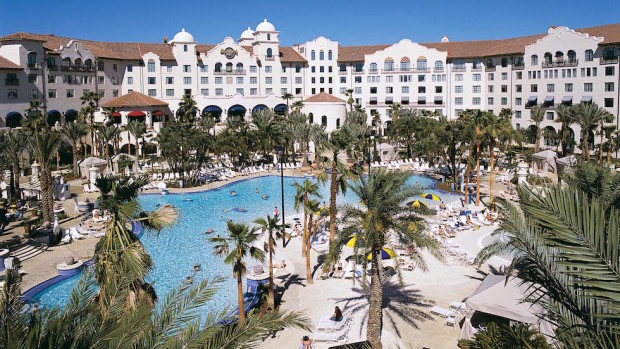 An entirely new collection of music memorabilia has been assembled at the Hard Rock Hotel at Universal Orlando Resort.

From The Rolling Stones, Elvis and The Beatles to Rihanna, Lady Gaga and Santana, the collection is the finale to the hotel’s multi-million dollar renovation, coinciding with the hotel’s 15th anniversary this year.

Recognized for infusing hospitality with music for more than four decades, the global collection of Hard Rock venues applaud music history through the brand’s signature music memorabilia displays adorning wall to wall. With more than 80,000 legendary pieces, Hard Rock is the curator of the world’s most expansive and priceless music memorabilia collection and Hard Rock Hotel at Universal Orlando welcomes guests to enjoy this first-hand music experience.

“As music is a universal language and Hard Rock celebrates music that spans all genres and eras, we wanted the new memorabilia collection to celebrate iconic names in music’s past and present,” said Jerry Fraize, director of memorabilia for Hard Rock International. “The premier display located in the hotel lobby now celebrates the legends of The Beatles and Rolling Stones in an awe-inspiring showcase. Additionally, to enhance the guest experience, we have added QR codes that allow instant access to the history of each piece in this extraordinary collection.”

From the suit John Lennon wore in the Beatles’ classic 1964 film debut, “A Hard Day’s Night” to a latex gown worn by Lady Gaga, the new collection of memorabilia shows off music’s impact on culture. Highlights of the new collection also include Keith Richards’ five-string guitar used during the Stones’ Some Girls tour; a jumpsuit worn on stage by Michael Jackson during the Jacksons’ 1984 Victory tour; a dress worn by Carrie Underwood in the video for her 2014 hit “Something in the Water” and a mixer, outfit, cake prop and headphones used on stage by Steve Aoki, among other items.

Hard Rock’s renowned collection got its start innocently enough when a regular patron of the Hard Rock Cafe London handed over his beat-up Fender Lead II guitar as an irreverent gift to the burger joint he loved and suggested it would look nice on the wall. Then, another London guitarist and Hard Rock regular sent the cafe his Gibson Les Paul with a note that read, “Mine’s as good as his any day.” The story would have ended there, if the two guitarists were not named Eric Clapton and Pete Townshend.

For more information or to book a stay at Hard Rock Hotel at Universal Orlando, visit HardRockHotelOrlando.com or contact your travel agent. We recommend MEITravel.