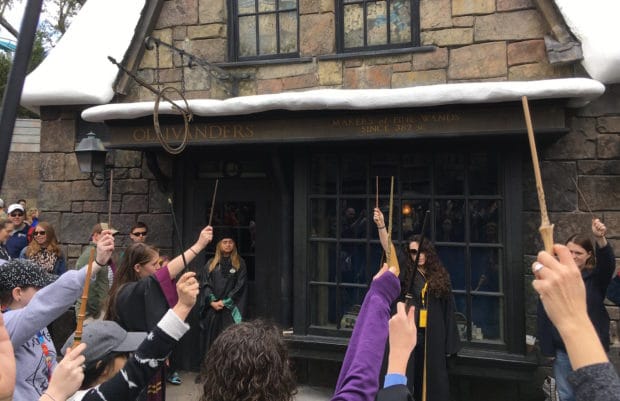 As the first day of this year’s A Celebration of Harry Potter ended at Universal Orlando, the world found out actor John Hurt had passed away.

Hurt was best known for many iconic roles, among them was that of Garrick Ollivander in the Harry Potter films. As day two of the Celebration event began at Universal, Mugglenet.com staff members and fans gathered outside the Ollivander’s Wand Shop in Hogsmeade at Universal’s Islands of Adventure to say goodbye by raising their wands, a gesture from the Potter novels and films to honor the fallen.

Another gathering was also held in Diagon Alley at Universal Studios Florida:

During the 2016 Celebration of Harry Potter, there was a large gathering outside of Diagon Alley to say goodbye to Alan Rickman, who portrayed Severus Snape in the Potter films.

Amazing blog about how people still remember the memories of an actor, and the way they react is quit amazing.Thanks for posting the blog.

A look at what Orlando’s theme parks...