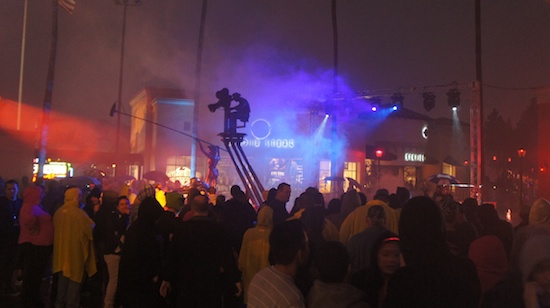 I’ve been to all of the Universal Studios theme parks (Orlando, Osaka, Singapore and Hollywood) and it’s interesting to see the similarities and differences between them.

The most striking difference between the Hollywood park and the others is that it is built sprawling across a hillside, and it interweaves with constant activity of movie and TV production. This means their tram tour route often varies. 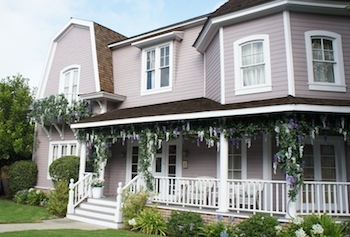 For example, the Desperate Housewives television show is in production during the week and the tram tour can only visit that street on weekends. One of the highlights on that street is the house used in the classic 1960s Munsters TV show. It’s funny to see the house decorated excessively with flowers.

The daytime tram tour also goes through areas used for Halloween Horror Nights. Sets are still standing from the How the Grinch Stole Christmas live action movie and the more recent War of the Worlds movie jet crash scene. 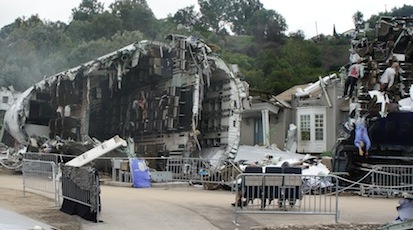 For Halloween Horror Nights, they embellish these sets with bodies, fog, and flame effects and create an outdoor scare maze.

During Halloween Horror Nights, the tram tour becomes Terror Tram. The tram picks guests up from the normal day loading area and takes them up to the Grinch set, where they disembarked and walk up the hill through assorted menacing scaractors, some armed with knives, many with chainsaws. Others just to leap out at you in the dark. 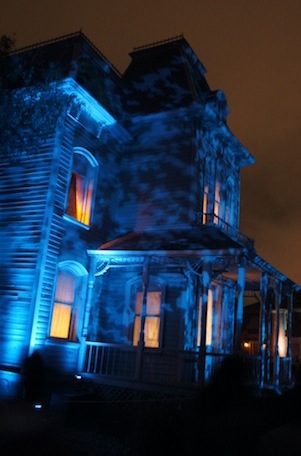 It was fun to walk through the sets, but really, I was more thrilled to walk next to the Bates Motel from the 1960 movie Psycho. I’ve taken the tram tour perhaps 50 times in the past 20 years. But it was awesome to see the Psycho sets up close.

The Terror Tram was themed to the Chucky character. Part of the story is that it was Chucky that set the fire that destroyed the King Kong attraction and many urban street sets in 2008.

The newest attraction at Universal Studios Hollywood is King Kong 360, the replacement for the destroyed attraction. It opened in June. For Halloween Horror Nights, you could board another tram that took you directly to see the new Kong.

Trams take a slightly different route at night to reach Kong 360 than in the daytime, passing the cast and crew entrances and parking structures near Lankershim Avenue. Along the way, trailers for upcoming films were shown on the tram’s monitors. Afterward, we saw video about a making of Kong 360. This video is not shown in the daytime tour. 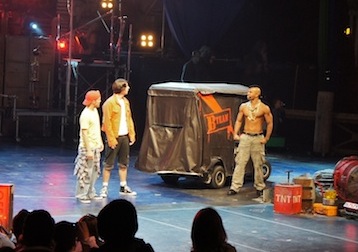 Bill and Ted’s Excellent Halloween Adventure is essentially the same as in Orlando. Some parts are more geared to L.A. Some segments in Orlando were not in the Hollywood version (Toy Story). The fundamental differences in the show were the stages. In Orlando, the stunt show theater is used, which allows for bigger explosions and an actual vehicle during the A Team skit.

One thing you can’t do in the Orlando show is take photos or video in the haunted houses or the Bill & Ted Show. The only camera restrictions in Hollywood are no flash photography and no video lighting. Hollywood welcomes you to share all your experiences at Halloween Horror Nights with your friends. 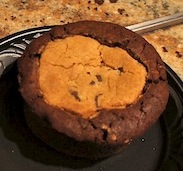 The rest of the Hollywood Halloween Horror Nights is similar to Orlando’s. Both have many scare zones and indoor haunted houses/mazes.

One delicious discovery I made in Universal Studios Hollywood was a Brookie. It’s a one-inch thick chocolate chip cookie, surrounded by a brownie cup – mmmmm.

Here’s a quick video of Halloween Horror Nights in Hollywood with a warning that some scenes may be too intense for children and some squeamish viewers.

A look at Halloween Horror Nights at Universal Studios Hollywood

Photos, video and a recipe from the grand opening of Karamell-Kuche at Epcot

LOVE this video. what type of camera did you use to record this? seems like great quality for such a dark event! i went too but didn’t bring a camera… didn’t know you were allowed to record in california!!