Howl-O-Scream 2010 to offer new and unique houses, zones and shows 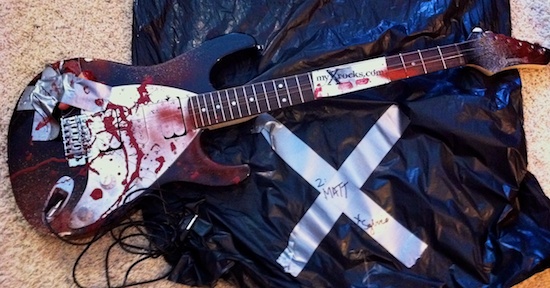 Busch Gardens officially kicks off it’s 11th season of scares with more haunted houses than ever before, all new scare zones, a new idea in how to experience a haunted house and live concerts each night by the rock stars of horror – Sylvie and her killer band, My X.

We love it when packages are delivered but we weren’t expecting a bloody, battered guitar with a severed finger tied to a guitar string. When weird, cool, but disgusting, things arrive in our mail, we know it’s getting close to Halloween. This particular package was sent to us by the above mentioned Sylvie.

When we thanked her for giving us the guitar (and giving us the finger) via her @SylvieMyX Twitter account, she said Howl-O-Scream told her to “make nice” with us, and that’s as nice as she gets.

We later figured out where the finger came from when this music video was released:

Here’s the full Howl-O-Scream lineup for those brave enough to attend.

Howl-O-Scream 2010 has more haunted houses than ever before, designed to amp up your deepest, darkest fears…

The two new houses are:

Alone… (A personal experience in horror)
The deranged Master Alexander Daedalus opened Minotaur Storage to house his vast collection of “cultural” remains. But now his sinister obsession with hoarding has expanded to stockpiling people. Escape this lunatic’s labyrinth or you will become part of his collection. Can you make it out alone?
Alone is a unique, all-alone experience through the haunted house. This house has an additional cost of $24.95 if purchased in advance online or $34.95 at the park. Those paying may bring up to three guests with them at no extra charge. But only those who make it all the way through by themselves will get a T-shirt.

My X: Revenge Rocks
My X is the hottest underground band in town, and its devoted fans are dying to meet Sylvie and her killer group. After sneaking backstage and discovering the disturbing truth behind the cruel lyrics, the quest to “get in with the band” quickly changes to a life-or-death race to get out.

Here are the returning houses with some new twists:

Delta Epsilon Delta: Extreme Rush (DEDer)
Sisterhood is forever, and the torture and pain of sorority life amp up to a new extreme during Rush Week 2010. ΔΕΔ alumni return to celebrate a new chapter in the house’s dark history, marked by the mysterious chapter’s new My X anthem, “It’s never been better than to be D.E.D.er!”

Deconstruction: The Doctor Is Out of Control
Dr. Edger VonAngst has the skill and technology to make you over… but what will you become? This mad reconstructive surgeon has fallen one notch deeper into insanity, putting people back together with mechanical pieces, combining flesh, bone and steel in the most hideous ways.

Death Row Vengeance: No Escape
The inmates at Grey Echo Penitentiary are slated for execution, and they blame you. With their last breath, they curse those who do nothing to save them from the electric chair or lethal injection and vow to haunt those who watched them suffer. Will you make it out alive when they come back to make good on their dying promise?

Taste of Blood: A Different Vein
Once revered as royalty, hordes of undead vampires have now been forced underground into the subways and sewers to avoid the sunlight. By day, they feed on rats to survive. But as night falls, these fanged fiends take to the streets to seduce fresh blood.

Trapped in the Walls: Ghostchasers
The gruesome fate of an innocent family made headlines when their bodies were discovered years ago. Today, you’ll join a paranormal research team as they attempt to reveal the house’s horrible history by investigating the dark demons trapped by the lingering evil that has seeped into the walls.

This year brings five all new scare zones and bands of roaming hordes:

Xtreme Fanatics
My X’s most devoted and deranged followers call themselves X-treme Fanatics. They unite to share their obsessive dedication in hopes of finding new converts and erect a shrine to their beloved Sylvie and her killer band. They will stop at nothing to prove they are the ultimate fans!

Road Trip
Free-wheeling college students set out on a road trip to see their favorite band, My X. But when their van breaks down on a deserted road, the stranded students soon discover that the forest surrounding them is filled with half-man, half-beast creatures with a taste for human blood.

Crazed Love
The bleeding hearts of jilted lovers unite through their stories of heartbreak. From the bride left at the altar to the woman who has been cheated on one too many times, these depressed devotees will go to any length to un-break their hearts and claim revenge. Happy Together doesn’t happen here.

Spiders and Snakes
A meteor crashed to earth, creating a glowing beacon that lures all things creepy and crawly. Snakes slither and spiders sneak in swarms larger than your nightmares can imagine. Shivers will crawl up and down your spine when you traverse this path infested with some of the most feared creatures on earth.

Light of Doom
Try to collect your senses as specters of light and shadow blur the line between this world and the next. Here, you will be challenged to wander through a maze of illumination and fog. Eerie apparitions confound and confuse as they try to trick unsuspecting guests “into the light.”

Look for two new shows and a returning favorite:

My X Live
The killer band, My X, will rock all 18 nights of Howl-O-Scream with performances at 10:30 p.m. and midnight every night on the Gwazi Plaza stage.

Blood Relations
Ready for a bloody good time? In the great hall of Blood Manor, the will of the recently deceased Lady Betty Blood is read for her surviving relatives. This sinister musical is packed with sadistic humor and a family of relatives with more than just skeletons in their closets. Performing nightly at the Desert Grill.

Fiends
Is there a doctor in the house? These captivating creatures of the night will infect you with dance fever and keep your pulse pounding with their deranged dance party. But when Dr. Freakenstein’s naughty nurses start operating, the diagnosis is always “code pink.” Performing nightly at the Stanleyville Theater.

The 21 and over nightclub and horror gift shop also return with some tweaks for 2010:

Howl-O-Scream Shop of Horrors
Remember your evening of evil with the perfect Howl-O-Scream souvenir, including Sylvie’s signature jewelry, exclusive My X concert T-shirts and other Halloween-themed gifts. Then, smile through the pain and snap the perfect party pic with the ΔΕΔ girls at an exclusive photo op that’s not for the faint of heart.

Take advantage of the best way to see Howl-O-Scream with all-inclusive VIP Packages, which include event admission and a tour guide. Three levels include Super, Mega and Ultimate. The Super experience is a three-hour group tour of haunted houses that includes front-of-the-line access. The five-hour Mega experience adds reserved show seating, front-of-the-line access to several roller coasters and preferred parking, and the Ultimate experience adds the Fright Feast dinner buffet, meet and greet with the Howl-O-Scream creative team and a $5 games card. All tours include commemorative photos, merchandise discounts and complimentary beverages. Packages start at $79, and Passport Member discounts are available.

For those who prefer to self-guide themselves through the event but want the front-of-the-line perks, there’s the Front Line Fear pass for $35, which grants no-wait access to seven houses, excluding Alone. The Front Line Fear Extreme pass ups the access and lets guests skip the line at four coasters as well for $50.

The Thrills & Chills Weekend Pass lets true Halloween fans face their fears over and over again with a long weekend (Thursday through Sunday) of unlimited access to Busch Gardens’ thrills by day and Howl-O-Scream’s chills by night for $79.95.

For out-of-town guests, Overnight Fright Packages include Howl-O-Scream admission for two, plus one-night accommodations at one of Busch Gardens’ preferred partner hotels. Prices start at $168.90 plus tax, based on double occupancy. Stay two nights as part of the Thrills and Chills Weekend Package, and get in to Busch Gardens day and night, and two nights of accommodations. Prices start at $337.70 plus tax.

Fright Feast is the most deranged dinner show in town, featuring a buffet of main courses and desserts, plus an exclusive performance of Blood Relations. Fright Feast guests are also the first to brave the dark with a half-hour of early access to the all-new haunted houses. Fright Feast is $24.95 per person, with group rates and discounts for Passport and Fun Card members available.

Howl-O-Scream is a separate ticketed event, and general admission is $74.95. Savings are available on advance ticket purchases at participating Publix Supermarkets and at MyXRocks.com for Passport Members and Florida Residents. Discounts are also available with promotional codes from select Pepsi, Domino’s Pizza, Applebee’s, Smoothie King and Muvico theaters purchases statewide.

YO MOM CHECK THIS ITS WICKED AWESOME

Early Night Live: Giving thanks for the...