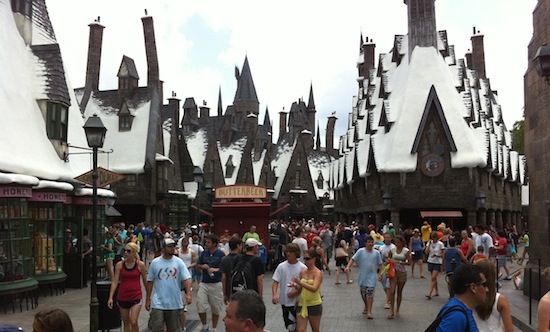 Keith Cardin loves visiting the Wizarding World of Harry Potter. He thinks it’s an awesome place for fans to visit, so much so, that he’s trying to raise money for a pair of financially-strapped hard-core Potter fans to win an all-expenses paid trip to Orlando and Universal’s Islands of Adventure.

“Upon visiting the Wizarding World with my sister, we spoke about how incredibly fortunate we were that we lived only 20 minutes away,” said Keith. “Yet, there are millions of people who are die-hard Potter fans that won’t be able to visit because of financial reasons. And then it hit me. I bet I can find tons of people who would contribute, just a little or at least a dollar, and have it snowball into the ability to send two people to the Wizarding World, completely expense-free.”

That’s when the idea for the non-profit International Confederation of Wizards was born. So far they’ve raised more than $500 of the estimated $4,000 they’ll need. They are excepting donations through their website at confederationofwizards.org. Even though they haven’t raised the money yet, their contest is underway, requiring fans to post a video to the organization’s YouTube Channel answering the question, “Why should the fandom choose me to be sent to Orlando to enjoy a vacation at the Wizarding World of Harry Potter?”

Thirty days after the funds are raised, 50 of the top videos (chosen by staff) will be put on the Confederation’s website where the winners will be chosen by popular vote over a two-week period.

The prize includes round-trip airfare, three days park admission, hotel accommodations and a $100 Visa gift card for each fan for each day of their stay. One hundred percent of the funds (donations, sponsorships, and contributions) will go directly toward those expenses.

Only contestants residing in the U.S., Canada, U.K. or South America are eligible. A full list of requirements can be found on the Organization’s website. The winners must have never visited The Wizarding World of Harry Potter.

“So many of J.K. Rowling’s readers have had their lives altered in some way from this book series. There’s more to it than just a few books for us,” said Keith. “The stories in these books have shaped us into better people. This once-in-a-lifetime experience should be had by every single fan out there. Not one member of the fan community wishes they couldn’t live in Harry Potter’s world, and this is their shot. That’s what we’re giving to them.”

If this contest is successful, Keith hopes to keep it rolling and be able to continue to let super Potter fans step foot into the Wizarding World.

Howl-O-Scream 2010 to offer new and unique houses, zones and shows