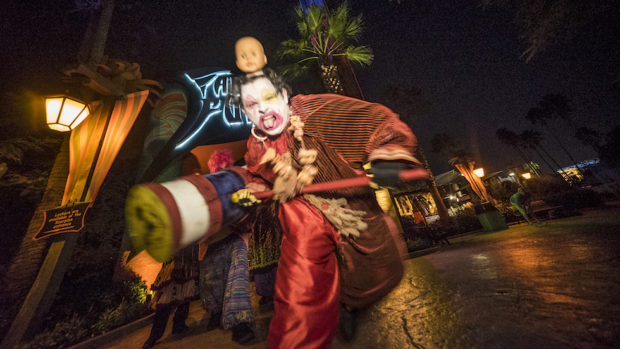 Mr. Karver and his dolls are ready to give guests at Busch Gardens Tampa an Evil Encore with the start of the park’s annual Howl-O-Scream event.

For 21 select nights starting tonight, no soul is safe from the Evil Encore at Howl-O-Scream 2016. Tampa Bay’s premier Halloween event will be infested with tormenting surprises and unexpected terrors around every corner, two brand-new haunted houses and a storyline starring a disturbing cast of demon dolls.

From vengeful vacancies to murder-plotting pirates, Howl-O-Scream’s two newest haunted houses are creepier than ever:

• Motel Hell
Nightmares become reality at this deserted motel once you realize why it’s conveniently vacant. The paranormal presence of its former owners still lurks on the untouched property, mysteriously preventing the brave souls who have attempted to tear it down. Guests who enter will find themselves face-to-face with their worst nightmares and inescapable fate.

• The Black Spot
When Saw Tooth Silas, an infamous pirate, decides that one should no longer exist, he marks them for death. Victims are then sent to The Black Spot, where they meet their horrifying end. The trick lies within the dimly-lit corners of the mysterious hideaway, holding the secret to escape… or demise.

From the depths of the Bayou to the undead invasion of Zombie Containment Unit 15: Moving Targets, some of Howl-O-Scream’s most demented houses are back by popular demand:

• Unearthed – During maintenance at the park, an excavation crew uncovered a centuries-old house buried deep beneath the ground. Upon entering the house, a vengeful demon seeking revenge is Unearthed.

• Zombie Containment Unit 15: Moving Targets – Armed with only a Z.E.D. (Zombie Eradication Device), it’s up to you to hold off an undead mob in this interactive zombie hunting experience.

• Death Water Bayou – Deep in the bayou the Voodoo Queen transforms wanderers into her evil minions. Those who enter must escape her dark magic before falling victim to her spell.

• Circus of Superstition: The Last Laugh – You’ve tried to avoid black cats and sidewalk cracks, but the bad luck of all your childhood superstitions has finally caught up to you with new demented fears.

• Zombie Mortuary – Led by their queen, zombies infest this small town funeral home and satisfy their hunger with the fresh flesh and brains of mortuary mourners.

By popular demand, roaming hoards are infesting Howl-O-Scream 2016 at an unstoppable rate and no one is safe. From their screeching welcome at the front gates to the eerie traps in the depths of the park, these scare squads are mercilessly recruiting for their growing mobs.

Freaky Preview returns this year and opened Howl-O-Scream 2016 last night and tonight, Sept. 24. The event then runs select nights from Sept. 29 through Oct. 30. Operating event hours are 7:30 p.m. to 1 a.m.

Howl-O-Scream 2016 is a separately ticketed night event. No costumes are allowed. For guest information, visit HowlOScream.com.

Here’s a look inside “The Playground” Scare Zone at this year’s event:

You can even drive bumper cars with zombies at Howl-O-Scream:

Be sure to watch the Sept. 29, 2016 episode of Attractions Magazine – The Show to see the Scream Cam for Motel Hell and more.