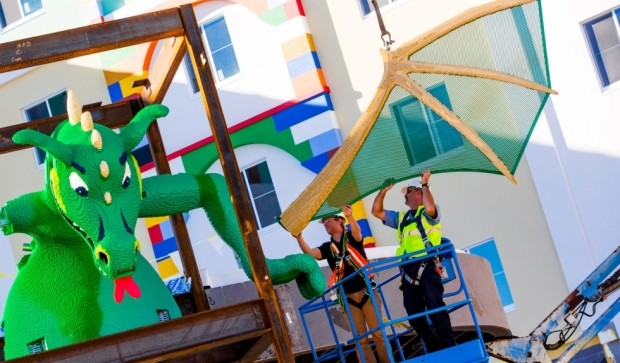 Towering above guests as they enter Legoland Hotel, a Lego dragon model has been installed at Legoland Florida Resort.

Created out of more than 445,000 Lego bricks and weighing approximately 2,800 pounds, this marks a major construction milestone ahead of the May 15 opening date at the five-story, 152 room hotel that’s built for kids.

A construction crew and Master Model Builders worked together to position the iconic dragon, carefully crowning the clock tower. The smoke-breathing dragon, perched atop the clock tower, will both stun and delight hotel visitors upon their entrance to Legoland Hotel.

The Lego dragon joins the hotel’s first permanent resident, the Lego bellhop. Other recent arrivals include a Lego knight, a Lego pirate and a Lego adventurer, which represent three of the four room themes. The fourth theme will be announced soon.

These are just a few of the more than 2,000 Lego models to explore throughout the hotel created out of more than two million Lego bricks. Each room will have a minimum of eight models and a bucket of Lego bricks for kids to create their own models.

Located just steps from the main entrance of Legoland Florida Resort, Hotel guests will have exclusive early morning access to the theme park designed for families with children ages 2-12.

To make a reservation visit LegolandHotel.com.

Watch our Jan. 22, 2015 episode of Orlando Attractions Magazine: The Show below to see a construction tour of the Legoland Hotel: