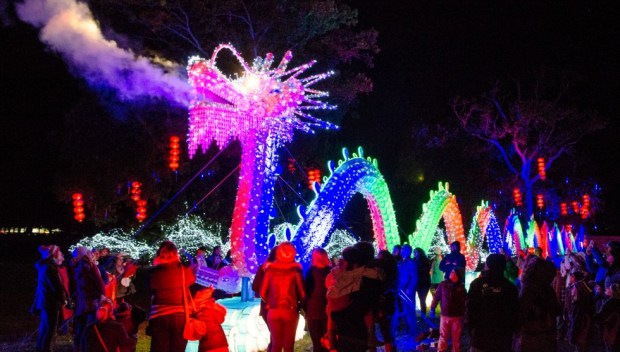 Chinese lantern structures will illuminate Tampa’s Lowry Park Zoo this spring for Zoominations, a first of its kind event in the Southeastern U.S.

A team of 40 skilled craftsmen and women from the village of Zigong, the birthplace of the Chinese Lantern Festival, have arrived at Tampa’s Lowry Park Zoo to build Zoominations, A Chinese Lantern Festival of Lights. The three-month exhibition will debut at the Zoo Feb. 28 during Chinese New Year celebrations. The festival will be held select nights stating at 6 p.m. through May 31, 2015.

The craftsmen traveled 7,500 miles to Tampa where they will spend four weeks manually constructing the large-scale illuminated displays. The first set of materials filled two semi-trailers which was transported on ocean carriers, with more shipments to come.

The ancient art of lantern making requires years of study in the trade combined with modern technologies. Artisans draw patterns of the structures on the ground, design and weld 3D wire frames to make the forms, insert LED lights into the framework, and apply silk fabric over the frames. The individual structures will be assembled into 30 scenes over 26 acres of the Zoo, representing traditional Chinese themes from nature to folklore and groups of larger-than-life Zoo animals like elephants and rhinos.

In China, the Lantern Festival is held on the last day of the Chinese New Year celebration (falling on March 5 in 2015). It is one of the country’s most important traditional festivals, tracing back to the Han Dynasty more than 2,000 years ago.

Anticipated to be one of the largest lantern festivals held in the U.S., Zoominations will also feature performances by Chinese acrobats and an artisan market with unique handmade crafts.

Here’s a look at the festival lanterns: