Imagineers, legends and luminaries to be a part of Epcot’s 30th anniversary celebration 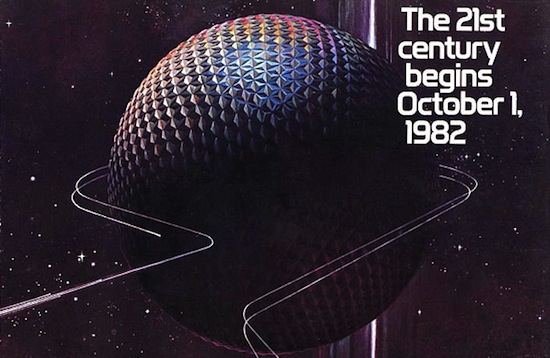 Calling all true Walt Disney World and Epcot fans. Plan your trip now for Epcot’s 30th anniversary on Oct. 1, 2012, as you won’t want to miss any of the presentations D23: The Official Disney Fan Club has in store.

Since Oct. 1 falls on a Monday, D23 has decided to celebrate a day early. From 9 a.m. to 5:30 p.m. on Sunday, Sept. 30 inside Epcot (Park admission is required and not included), the Epcot 30th Anniversary Celebration will whisk D23 Members back to a time touted as when “the 21st century begins” — those early Epcot years when guests first marveled at “Astuter Computers,” “Smellitzers,” and the novelty of “riding on sunshine”.

“When Epcot opened in 1982 it was a monumental achievement and its opening was an unforgettable moment for Disney fans everywhere,” says Steven Clark, head of D23. “We know our members have a deep passion for this park, and we’re producing a memorable experience that lets our members relive some of their favorite Epcot shows and attractions of the past while experiencing the incredible Epcot legacy that continues today.”

D23’s Epcot 30th Anniversary Celebration will offer the most detailed look at the design, development and evolution of Epcot ever presented by The Walt Disney Company and will include rare and never-before-seen artwork; film and video footage and photos; along with a number of pioneers of Epcot, including such Disney Imagineers, Legends, and Epcot luminaries such as Marty Sklar (exclusive pre-taped presentation), Tony Baxter, Jason Surrell, Jason Grandt, Alex Wright, Ron Schneider, Charlie Ridgway, Ron Logan, Bill Sullivan, Bob Garner, Duncan Dickson and Steve Taylor.

Hooray for the 21st Century – Disney Legend and former Walt Disney Imagineering Principal Creative Executive Marty Sklar joins D23 guests via a virtual presentation, where we see and hear what it was like to work with Walt Disney on his original vision for an Experimental Prototype Community of Tomorrow (EPCOT). Along the way, learn about Marty’s favorite memories working on the Epcot Center project with a team of passionate Imagineers.

The Music of Epcot Center – Some of Epcot’s most passionate fans agree that the park’s soundtrack has created one of its most lasting legacies that continue to help “makin’ memories” around the world. Join Disney historians and songwriters as we explore the incredible world of Epcot music, celebrating the talents of such Epcot songwriters and composers as Bob Moline, Richard M. and Robert B. Sherman, George Wilkins, Buddy Baker, X. Atencio, Peter Stougaard, Russell Brower, Edo Guidotti and others who have left a permanent musical mark on the park’s creative legacy. Along the way, hear stories about the recording sessions, learn about some fascinating alternate versions of some of your favorite melodies, and sing along to your favorite Epcot tunes.

We Can Do It! – Disney Legends and Epcot Center creators review the immense challenge that loomed ahead of them when bringing Epcot to reality in the late 1970s and early 1980s. Guests will hear stories of trips to foreign countries to secure participants in the World Showcase concept, what life was like inside the largest private construction project in the world, and how they readied its highly anticipated opening day.

We’ve Just Begun to Dream – Join Disney Legend Ron Logan and other key Disney entertainment veterans as they reminisce about the official Epcot Center opening festivities that remain among the most elaborate Disney has ever staged. This presentation will include rare footage from the grand openings of various Future World and World Showcase pavilions, which were held throughout October 1982.

Makin’ Memories: Epcot on Film – Join former Disney Imagineer Bob Garner and Disney author and historian Tim O’Day as they cast a “Magic Eye” on the marvelous world of Epcot on film. Bob was closely involved in the creation of film documentation and production at Epcot, including special video elements of Future World and World Showcase pavilions and such promotional films as Epcot Center: The Opening Celebration.

Looking Back at Tomorrow – Few Epcot visitors, even its most avid fans, realize The Land pavilion was almost called “Harvest Tomorrow” or that Figment was slated to co-host an “Images & Imagination” pavilion with “Professor Marvel.” With recently discovered materials from the Walt Disney Archives, join Disney archivists as they examine how the “dreamers and doers” developed favorite Epcot attractions of the past including Horizons, Journey into Imagination, Kitchen Kabaret, World of Motion, the Astuter Computer Revue, and the original Universe of Energy.

The Epcot Center That Never Was – Using rare concept artwork, guests will glimpse what it was like to design Epcot with Walt Disney Imagineering Senior Vice President Tony Baxter, designer and producer for several beloved Epcot pavilions, and explore early versions of Epcot attractions that never made it off the drawing board.

Imagineering Epcot: An Extra Perceptive Close-up Of Things – Fans of wall-to-wall carpeting and leapfrog fountains unite! Disney Imagineers Jason Surrell, Jason Grandt, and Alex Wright return with a humorous exploration of the details that make Epcot so unique. From miniature gardens to massive buildings (and every international food and beverage offering in between), they’ll show what makes Future World and World Showcase like no place else on earth.

Tickets will be available for purchase starting at 10 a.m. on June 21 on D23.com. Although you must be a D23 member to attend, each member may bring up to three guests. Park admission is not included in the ticket price.

There are two levels of D23 Member participation:

World Key
• All features of the World Passport admission
• Reserved seating for all presentations
• A special dessert reception at 8 p.m. inside an exclusive Future World lounge
• Exclusive meet-and-greet opportunity with Disney Legends and Epcot luminaries
• Reception will also include screenings of rare film footage of Epcot’s early days
$185 per guest

More details about the program and tickets for D23’s Epcot 30th Anniversary Celebration can be found online at D23.com.

I realy, realy, realy miss the year long celebrations. This sounds fun but it would be an insentive for me to get there when it was the whole year through.