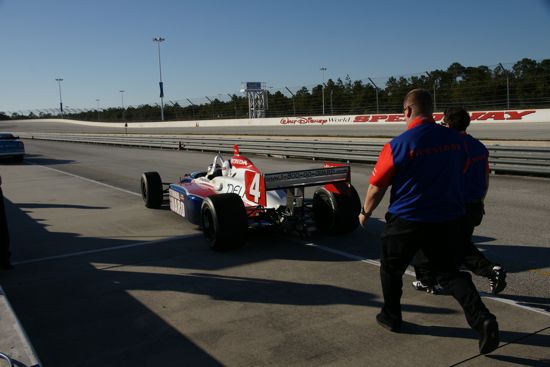 The Indy Racing Experience is expanding its operations to the Walt Disney World Speedway beginning Monday, Nov. 17. Race fans and thrill seekers will have the opportunity to both drive and ride in actual cars that were used in past Indianapolis 500 events.

Since 2001, the Indy Racing Experience has been giving patrons nationwide the ride of a lifetime in its customized 2-seat IndyCar Series car at all the tracks on the IndyCar Series schedule. Race fans have also had the chance over the past two years to get behind the wheel of an IndyCar machine and drive around the historic Indianapolis Motor Speedway. Both the drive and ride options will be available at the Walt Disney World Speedway.

“Since we first began the Indy Racing Experience, fans have traveled the globe to feel firsthand what it is like to race around the Indianapolis Motor Speedway – the Racing Capital of the World,” said Indy Racing Experience Co-owner Scott Jasek. “Millions of people also descend on the Orlando area annually for its renown attractions, including Walt Disney World, so we feel our Indy Racing Experience is both a unique and fitting addition to this exciting landscape.”

The Walt Disney World Speedway is a one-mile, paved tri-oval located just outside the gates of the Magic Kingdom. The track’s three corners are uniquely banked, with the first turn at 10 degrees, the second at 8.5 degrees, and the third and final turn at 7 degrees.

IndyCar racing is not new to the Walt Disney World Speedway. In fact, IMS Events, a subsidiary of the Indianapolis Motor Speedway Corp., designed the track to host the Indy Racing League’s Indy 200 from 1996-2000. Davey Hamilton, who will pilot the Indy Racing Experience two-seater in the opening weeks, was one of five drivers to christen the track in a “Flying V” formation during the facility’s first test on Nov. 28, 1995.

“The Walt Disney World Speedway was actually home to my first IndyCar Series race, so obviously that track is special to me and I’m anxious to get back there,” said Hamilton, who has finished in the top 15 at the Indianapolis 500 the past two seasons. “Disney is a unique design that is different from any other track out there. It’s not your typical oval or tri-oval; the corner banking and elevation change in the back makes this track a thrill to drive.”

After suiting up in authentic driver fire suits and being strapped in by the Indy Racing Experience pit crew, fans will undoubtedly feel the speed, g-forces, and the pressure that comes with IndyCar racing.

The Indy Racing Experience will share track hours daily with the popular Richard Petty Driving Experience and operate on a first-come, first-serve basis. Drivers and riders must be 18 years of age or older. For more information, including rates, hours of operation, and corporate packages, please call (888) 357-5002 or log on to indyracingexperience.com.

Look for a full story on the Indy and Nascar racing experiences in the Feb./March 2009 issue of Orlando Attractions Magazine.

Cypress Gardens to close until March – Reopen without rides or animals

Celebrate the holidays with ‘The Disney Parks...