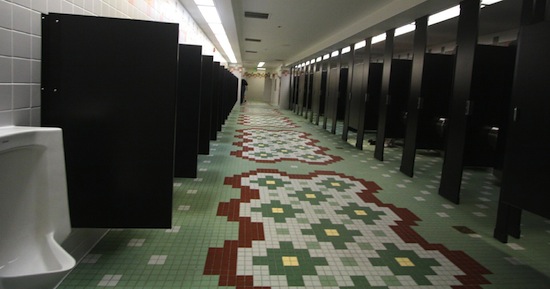 There are lots and lots of bathrooms at Walt Disney World. So many in fact, that it’s not hard to locate the nearest one. You can always ask a nearby Cast Member for help; usually the closest lavatory is mere steps away. But it can be difficult to find one that is uncrowded, particularly if – let me try to sugarcoat it this way – you don’t want to feel rushed. And by “unrushed,” what I mean is, you would rather be someplace where no one is waiting on you, which usually translates to there being a lot of toilets. I debated whether to even raise this topic – the jokes write themselves – but let’s face it, even this facet of human nature is part of the calculus in enjoying a trip to sunny Orlando.

It stands to reason that high-visibility locations will have correspondingly high traffic. Thus, even when a bathroom has numerous toilets, it may not be the best place to visit. The recently-remodeled restrooms in the Adventureland-Frontierland corridor at the Magic Kingdom fall into this category. Worse, most bathroom facilities have an insufficient number of toilets to start with; this is true of most of the restrooms in the parks. 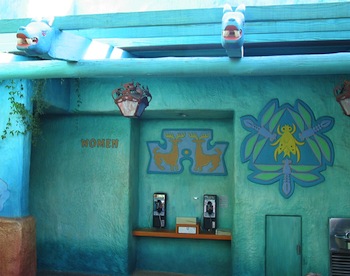 The best Animal Kingdom bathroom with a ton of stalls, most of them underutilized, would have to be at the exit to the Finding Nemo musical. Naturally, once the show lets out (and perhaps just before a show starts), there is a flurry of activity here, but otherwise the area is a lot quieter than most of the other restrooms in the park.

Having a nearby show is a good harbinger of a bathroom’s capacity. At Disney’s Hollywood Studios, the Lights, Motors, Action show holds a bazillion people, so the bathroom right outside the theater (facing the Big City set) is home to an impressive array of stalls. Absent a show, this area is usually quite untraveled.

Inside the Magic Kingdom, there are a lot of choices, but my pick goes to the newly done stalls in Tomorrowland (in the building that once was home to the Skyway station). Being off in the corner of the land, as this one is, means that it’s less visited. For an even more isolated experience, hop on the monorail back to the Transportation and Ticket Center, where three sets of restrooms await your visit. The most isolated of all can be found on the west side (not far from the boat dock).

Similarly, outside the gates of Epcot you’ll find another bathroom that no one visits. The one near the hotel busses gets a lot of business, but clear on the other side of the ticket booths (where the kennel once stood) is a bathroom that no one seems to know about. Now that security gates dictate a bag-check location back at the center of the zone, it’s inconvenient to travel this far for the bathroom, which is exactly why it’s so private.

World Showplace (the former “Millennium Village”) inside Epcot is the facility with the single largest array of stalls on property that I know of. But unless you’re here for an event, the World Showplace is kept closed behind gates between Canada and the United Kingdom. It opens on crazy crowded days, like New Year’s Eve, but even then it’s worthwhile to visit because of the sheer number of toilets at hand.

The other good spot to visit inside Epcot is in the former Odyssey restaurant, between Mexico and Test Track. You may have stopped here before, around the corner from First Aid and the Baby Center, but that’s not the bathroom I mean. There’s another set of bathrooms, completely unlabeled from the outside walkway, on the Test Track side. There aren’t a ton of stalls here, but then again, it’s so unnoticed that you might stay for minutes without being joined by another soul. Which was the whole point, after all.

• Kevin Yee is a theme park enthusiast and author. He’s written seven books about Disney theme parks, including his most recent work, Walt Disney World Hidden History: Attraction Remnants and Other Tributes. He visits at least two Central Florida theme parks per week, and is now working on an upcoming book compiling all the best tips for a trip to Orlando. You can find out more about Kevin at his Web sit ultimateorlando.com.

The restrooms in consevation station (Rafici´s planet watch) are awesome. They have info about how much some animals poep! And they have great sounds. It´s actualy the only fun attraction to visit in that part of the park, what a waist of space.

the bathrooms that are located prior to entering epcot’s international gateway are rarely crowded. you would have toexit and re-enter but it is only steps away.