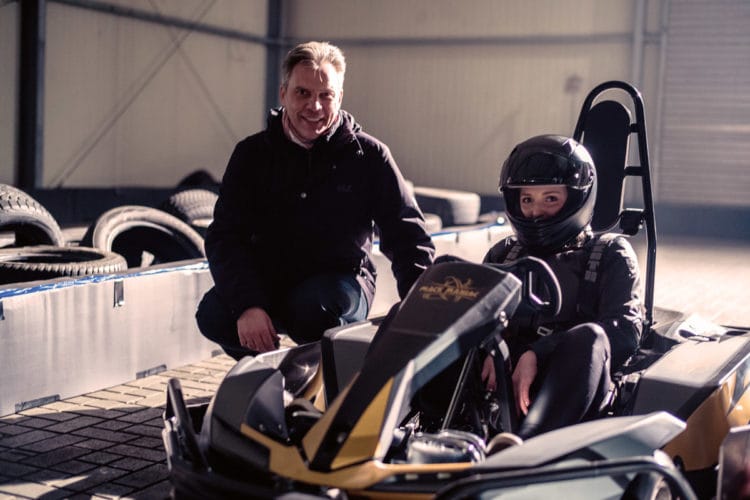 If you’ve ever wondered what it would feel like to drive upside-down, read our exclusive interview with Michael Mack, who has just designed the world’s first looping go-kart track.

Michael “Mad Man” Mack is the CEO of HeineMack GmbH and LoonyLoop Group in Nuremberg, which are owned by him and his family. (No relation to the Mack Family of MackRides and Europa Park.) He previously developed the Rollercoaster Restaurant, which had been implemented in Europa-Park, Sochi-Park in Russia, and Alton Towers Resort in the U.K. 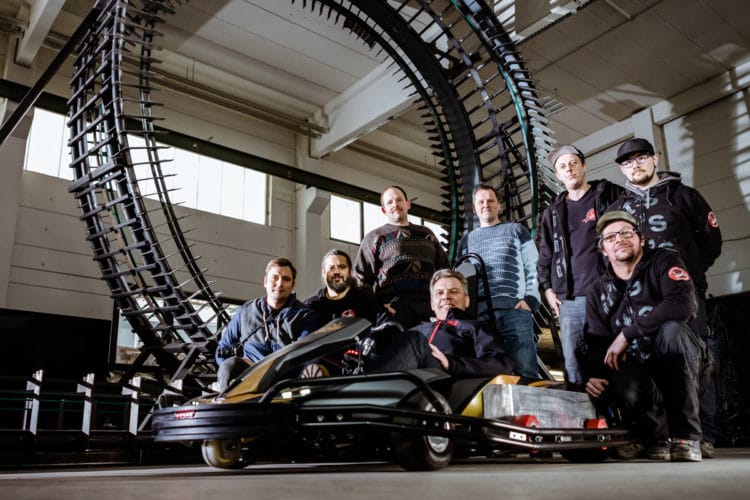 When did development begin on the Mack Maniac system?
The idea came to my mind a year ago. Since then we are developing the product and registered the technology for patent approval.

What was the initial inspiration for Mack Maniac?
I originally developed the idea of a new type of theme park. Carmusement offers car drivers the opportunity to drive through theme parks in their own car and be able to ride carousels, ferris wheels and rollercoasters in them. For this purpose, cars use single gondolas, which are adaptable to all rides. The car drives on the specially designed transport platform of the gondola where it will be secured and put onto the desired ride or Ferris wheel.

However, it had been quite obvious that the investments costs for a roller coaster or a Ferris wheel for cars might not be affordable. Despite this fact, and considering we are a small company, we needed to have an affordable prototype at hand in order to be able to present the concept to prospective partners. As a result I thought about the smallest car possible, which might be suitable for the installation of a prototype. It was then that a kart came to my mind.

The more I thought about the idea, the more I got convinced that it might be even possible to control and accelerate a kart autonomously while driving through a loop or corkscrew. Being moved on a platform while sitting in a car might not be as innovative and might merely be another version of a common roller coaster. This way, they’re actually not participating in the ride. I had been convinced then that Mack Maniac shall be a new type of a roller coaster: steering and accelerating autonomously and experiencing the thrill of the loop. In addition to that, driving races as commonly known for karts is also possible.

What were some of the challenges you had to solve to create Mack Maniac?
For me, the biggest challenge was finding a problem,  which – once it is solved – attracts a lot of people. As soon as the problem is identified and analyzed, it is actually easier to solve it. It seemed as if lots of people already thought about overcoming loops using different types of vehicles in video games. The possibility that this idea might be a problem which might actually be solvable, and in the end, even become available to everyone, had not been considered by anyone. Being open for all thoughts is of utmost importance. “Why not?” is the motto.

What speed are the cars travelling at as they drive through the loop?
Our loop has a height of approx. 7m (30 ft.). Assuming this loop is part of a common roller coaster ride, the carrier requires a minimum speed of 49 km/h (30 m.p.h.) in order to overcome the loop without additional acceleration. Our kart accelerates during the drive through. In our video, the kart has a speed of 40 km/h (25 m.p.h.) on the acceleration path. Please believe me: It takes a lot of courage to stay on the gas pedal while the loop is approaching, being as enormous as a wall. This is actually a totally new experience in comparison to a common roller coaster.

Could the loop be part of a regular track and the driver just drive into it without stopping?
Yes, of course. The karts are able to drive common races. While driving a race, the drivers may go through loops, corkscrews or steep turns as well.

What happens if the car stops at the top of the loop?
In case the driver does not accelerate enough in order to master the loop, he will be safely guided backwards on four heavy-duty rollers which are attached to the kart for this purpose. The chance that the kart stops moving at the peaking point is practically impossible. Nevertheless, for this case there are automatic drive systems installed which are able to push the kart further. 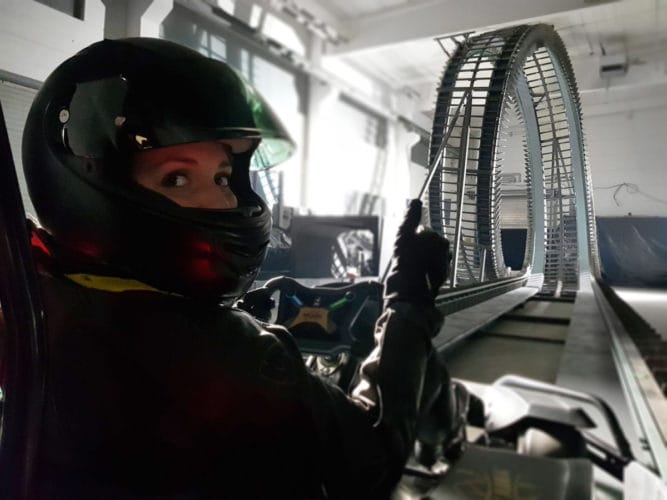 We are using electric karts only. This offers several advantages: On the one side, there is a better acceleration time. On the other side, the e-karts may be limited in regards of their maximum speed which is required for meeting a maximum G-force value of 6G. This applies not only for the acceleration path and the loop, but it is also important for the acceleration after reaching the peaking point of the loop. In case a driver might accelerate at this point, there might be the possibility of exceeding the permitted values.

What is the approximate price of a Mack Maniac installation?
The installation of a loop including the required patented safety systems as well as the safety adaptation of up to three E-Karts amounts to approx. 300,000€ ($369,000 U.S.). Delivery costs and travel expenses of the technicians is not included. In the end, the investment costs are significantly less than the costs for a common roller coaster ride. However, the capacity of a common roller coaster might be actually higher, as it may be able to transport a lot of people at once. 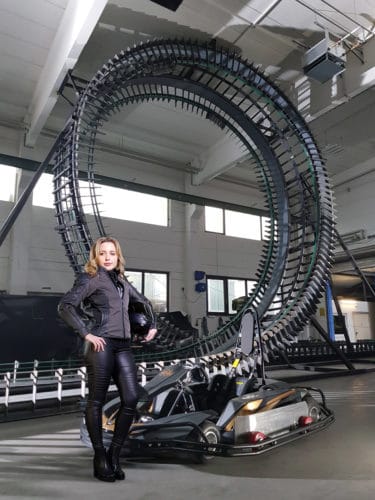 Have any Mack Maniac installations been sold yet?
We presented Mack Maniac in January at the International Kart Exhibition in Germany for the first time. Two weeks prior to this date our prototype had been finalized, which allowed us to finalize our promotion video for the fair as well. During the exhibition, as well as afterward, we received several requests from kart center operators. We are currently assuming that we will have sold three or four of our systems by the end of March, which shall be delivered, installed and operated after autumn 2018.

Have you personally driven the Mack Maniac loop? What does it feel like?
Naturally I was the first trying the loop. As already mentioned, it’s a totally new and exciting experience to ride a roller coaster actively. However, it takes a lot of courage to stay on the gas pedal while approaching the loop. But it was actually really cool! Courageous people are required. By the way, Mack Maniac has not only been developed for karts but for all types of vehicles. Why not drive a formula one race and pass through loops, corkscrews or steep curves some day?

For more about Mack Maniac visit visit madmack.de, and watch these videos for more go-kart action:

Going off the rails and more Nintendo...