The Dec./Jan. 2009 issue of Orlando Attractions Magazine features a story on the Walt Disney World Ambassador Program. There were a couple of companion stories we didn’t have room for in our print edition. Below is an interview with the very first Disney World ambassador. Also look for a day in the life of an ambassador and unpublished photos in our Photo Gallery. 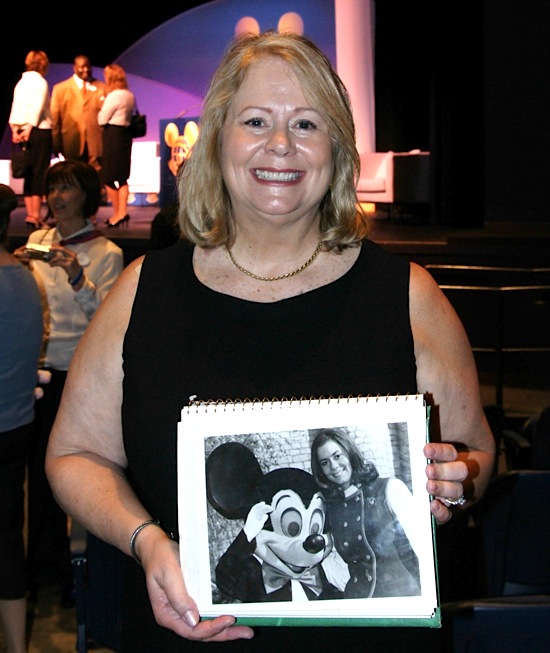 Debbie Dane Brown was just 19 and a local college student when she first became involved with Walt Disney World. From thinking it was going to be a wonderful state fair-like park, to becoming an expert on all things Disney, her tenure as their first ambassador was a whirlwind of new experiences and fond memories. “It was probably the most incredible and magical experience a girl could ever have had,” said Brown. She recently shared some of her most memorable moments from that time with Orlando Attractions Magazine.

How it all started
“When we got the word that Walt Disney was purchasing property in the Orange County area, we were so excited. And of course it was the biggest thing that had ever happened around here.” (In late 1969, she heard that the company was looking for 14 hostesses for their new Preview Center and she and her roommates were among the first hired.) “And then, following on the wonderful tradition Walt Disney started in Disneyland, the company wanted to have their own ambassador. So the first competition happened and I tried out with a number of other Disney employees and went through a series of interviews. And I was totally blessed and blown away that I was chosen as the first, even though the park had not opened yet. It was just a marvelous, awesome honor.”

Hitting the road as Ambassador
“Two days after I was selected, I flew out to California on the “Mouse”, which was Walt Disney’s plane. It was all so much fun for me because truly I had never been anywhere before. I lived out in Anaheim for about three months and learned all things Disney so that I could then hit the road. That’s when I talked with everyone from different groups, mayors, governors, pretty much everyone in the Eastern United States in most major cities and a lot of smaller ones. I was on the road most of the time, and in between trips I’d be back in town and take people on tours of the Magic Kingdom before it opened.

“The first time I remember going out on property in early ’70, there was dirt and cranes and bulldozers and mounds of dirt… and balloons. They would take people out on buses and tell them, ‘Well, that balloon is where Cinderella’s Castle is going to be.’ Or ‘that one over there will be the Contemporary.’ And it was just mounds of dirt! And they were digging the Seven-Seas Lagoon. And I remember parking my car on the bottom of what became Bay Lake. So I almost have this sense that it’s mine when I go back and visit.”

Opening day and soon after
“My year was a little bit longer with a couple of extra months thrown in because I was also involved with opening day, which was a marvel when I think back to it. The day before, the whole company was so busy getting ready and it went down to the wire. I remember being at the Contemporary around five or six in the evening and the sod hadn’t been laid. And several of us cast members went out and helped. And people were calling out, ‘Remember to put the green side up!’ It was really just the Disney family total immersion and you did whatever you could if someone needed help.”

Did you meet any celebrities during your time as ambassador?
“Oh yes, but I most treasured meeting Roy Disney and his wife, and Lillian Disney – Walt’s wife. I also met Jimmy Carter and Julie Andrews and Bob Hope. And during the grand gala opening night, Arthur Fiedler conducted an incredible symphony that was so marvelous. And Meredith Wilson led 99 trombones and 101 clarinets down Main Street!

“One of my favorite memories is from one night after we had been operating for about 25 days. And I was sitting there with some other cast members at about 10 o’clock on Main Street and there was a bit of a cool breeze and the lights were on. And I was just overwhelmed by the fact that what I originally thought was going to be like a state fair had grown into something so grand, just an incredible dream of Walt Disney. And of course, to me, being able to represent what he dreamt of and loved was an incredible responsibility and honor.”

After her tenure was up
“After I was an ambassador, I worked at the Contemporary and also did some trips when they needed some marketing assistance doing TV and radio appearances. And I was also involved when Epcot opened. With the other ambassadors through the years, we were like a little sorority. Now that there are men ambassadors, it’s a family. It used to be a sorority and now it’s a family. “Working at Walt Disney World was such a great experience mentally and emotionally, and was just a great background for me. I’ve used so much of what I learned there in my everyday life and in everything I’ve done after.”

The Ambassador stories were written by Deborah Brauser. You can follow her travel tips blog at orlandotravelwriter.wordpress.com.

A day in the life of a Disney ambassador

Wonderful article on Debbie. We were just kids back then & first met in July or August of 1971, when I was still in training as one of the original WDW cast members. She and I worked together at the Contemporary Resort Hotel in the Guest Services Department (I was a Lodging Host) and many of her memories are the ones that I still have, too. Prior to my employment with Debbie at the Contemporary, I had worked for Buena Vista Construction, under Joe Fowler, during the latter days of construction in the Magic Kingdom. It was quite an experience to be able to be a part of something so grand and to work with such nice people, such as Debbie. One of my most treasured possessions, is the very first group cast member photograph, taken in Sept or Oct 1971, of all of us in costume, posing in front of Cinderella’s Castle, and Debbie wearing her Ambassador’s costume. At that time, Debbie was one of my supervisors and am sure she more than earned her money when she had to deal with me! Nice seeing you, again, Debbie, after all these years. Hope you and family are doing well. You know, one doesn’t see very many articles about the original WDW cast members, so this article has special meaning for me!

Debbie, my memories of you are precious to me.

I remember getting a tour at the preview center with you and our families Your dad and mine were longtime friends and business partners. Remember you Bill Jr,Chris,&Doug