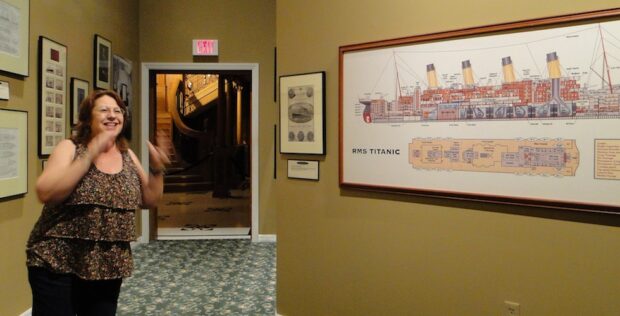 There may be a few visitors who simply refuse to leave Titanic – The Experience on International Drive. Spirits of the passengers and crew of the Titanic are said to inhabit the attraction, which showcases authentic artifacts from the fatal voyage.

Whether those pieces recovered from the ocean brought with them a presence from the past is a matter of debate. A paranormal investigation organization from Jacksonville has tested Titanic – The Experience and found evidence of activity. For over a decade, the staff of the attraction have been witness to strange noises, unusual events and other occurrences they just simply can’t explain.

In October, guests will have the unique opportunity to take a ghost tour through the attraction and decide for themselves whether or not it’s the site of ghostly activity. Actors who portray passengers from the Titanic in daily guided tours will lead the ghost tours and share their own personal experiences. Tours will be held at 5 p.m. on Oct. 17, 24 and 31, 2013.

During a media tour held recently, Jac LeDoux, floor manager and director of actors for Orlando’s Titanic, led a ghost tour through the rooms that recreate life onboard the ill-fated ship.

Jac started the tour in the lobby and explained what to possibly expect as we walked through the attraction. Having worked there for many years, Jac said he has had multiple encounters with ghostly passengers from the Titanic that still seem to be around.

Jac stressed that the people – she does not call them spirits – are not evil and have never done anything that was malevolent. She recounted stories of a little girl named Catherine that seems to be present in the building and is especially active. The staff even bought her a Raggedy Ann doll to amuse her – it’s on the shelves behind the registers where tickets are purchased.

As we walked through each room, Jac stated whether or not the location was a hotbed of activity. Some rooms seemed to have no paranormal activity, and investigators have agreed. Other rooms, though, such as the grand staircase, engine room and outside deck, seem to have the most paranormal encounters.

There definitely was a spooky feeling in some of the rooms. Whether or not it was because we had been told that there was a high amount of ghostly activity in those areas, I don’t know. One fellow guest actually felt like she was moving on water as we stood on the recreation of an outside deck underneath the night sky.

Nothing seemed to happen during our ghost tour, but the paranormal activity can’t be scheduled, obviously. Guests and staff often see and hear weird occurrences during normally scheduled tours. The ghost tour is a chance, though, to learn about the staff’s long-time interactions with the spirits of passengers who sailed on the Titanic and seem to have never left.

For more information on the tours, visit titanictheexperience.com.

Just read this article about the Titanic Experience, and I was there in 2009, long before reading this and I agree, one can feel the presence. It felt eery.

I definitely felt seasick, dizzy, and weak at one point in my tour. It happened after seeing the Marconi room and hearing the sos audio. After I seen it once I went back and looked at it again. Then, I was drawn back to it a third time and was so confused as to why I was going back to that room. Then, after seeing it again and figuring out where I meant to go and how to get there I got really dizzy and felt like I was on the ocean! I got really motion sick. I had to grab a rail to stay stable. Then, the feeling went away. So strange never felt like that before.