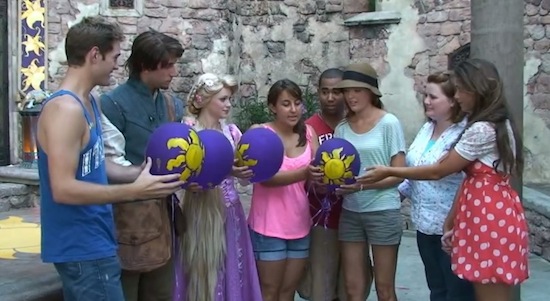 Yesterday was an emotional one for Flynn Rider, Rapunzel and all the cast who help out at the Tangled play and greet experience at Magic Kingdom. Flynn made his last regular appearance in the Fairytale Garden with Rapunzel.

Flynn and Rapunzel danced with the children, their parents and other fans around the large table then posed for photos. After the last guests had left, some off duty cast members and fans helped Rapunzel and Flynn release balloons in remembrance of his time at the meet and greet.

For now, Rapunzel will continue on without Flynn, meeting guests in the Garden near Cinderella Castle daily. Disney hasn’t given a clear reason for Flynn’s departure except to note that the experience will now focus on Rapunzel, who has become a guest favorite since she first came to Magic Kingdom last year. They also stated that Rapunzel will now have the opportunity to meet more fans each day. The line to meet the pair has often been a very long one.

In fact, Rapunzel has become so popular with Disney guests that she’ll be made an official Disney Princess in a special ceremony at Kensington Palace in London on Oct. 2, 2011. Ariel, Aurora, Belle, Cinderella, Jasmine, Mulan, Pocahontas, Snow White and Tiana will be there to welcome her.

But don’t despair, Disney has stated that Flynn will be back meeting guests with Rapunzel during this year’s Mickey’s Not So Scary Halloween Parties and Mickey’s Very Merry Christmas Parties.

Watch the video below to see Flynn and Rapunzel’s last day together for a while. You can tell Flynn is holding back some tears as he gives one last lesson on how to do his famous smolder. Tigger even comes by to help cheer Flynn up and say goodbye:

Harley-Davidson store moves into the West Side of Downtown Disney

I bet my little cousins would get over it quickly.

oh poor Flynn! He definately looked so sad, rapunzel looked thrilled though haha, no more sharing the limelight eh girl!
Shame there isn’t a rapunzel float he could appear on, he’s cute!

I saw him at Magic Kingdom back in December. I wanted to take a picture but my dad’s camera ran out of batteries! 🙁 I wanted to go again and meet him! Halloween here I come.

Hi i been to disney world alot of times and i never got the chance to meet my favorite characters rapunzel and flynn and now i find out flynns leaving 🙁 im going to disney world early next month and i would really like to see both of them! it would really make my dream come true if i got to see flynn and rapunzel! please disney bring him back pleasee!