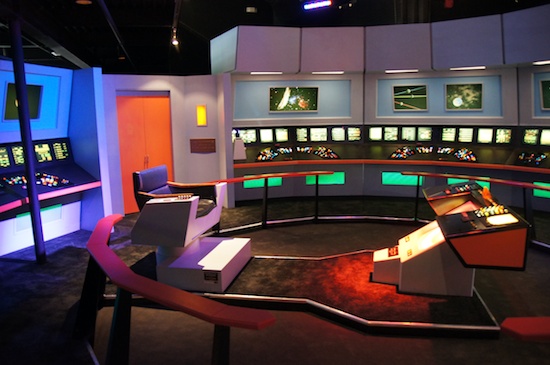 Now that Star Wars Weekends is ending, sci-fi fans can turn their attention to the coast as Kennedy Space Center Visitor Complex launches Sci-Fi Summer, a celebration of the last 50 years of human spaceflight and science fiction. Many of the events this summer center around Star Trek. For its first visit to the Southeast, Star Trek: The Exhibition is now open. And if that’s now exciting enough for you, the Visitor Center is also offering a chance to win a trip – to space.

Star Trek: The Exhibition is an interactive exhibit of authentic Star Trek artifacts from the past 45 years, featuring one-of-a-kind costumes, props and filming models from the television series and movies. Together these elements offer fans an opportunity to experience first-hand the imagination, artistry, technology and meticulous craftsmanship that have made Star Trek the most enduring science fiction franchise in history. 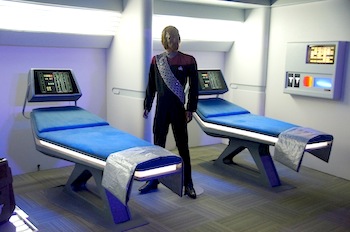 Go deep within the Star Trek universe to discover the history of this ground-breaking series and a recreation of the U.S.S. Enterprise Bridge from the original series, where visitors may sit in the original command chair of Star Trek’s most famous captain: James T. Kirk. See the actual props and costumes used in the TV series’ and films, and enjoy one-of-a-kind displays, including engineering and sick bay replica sets from Star Trek: The Next Generation, interactive kiosks, rare photo opportunities and unique adventures.

Continuing through the summer is Star Trek Live. The stage show combines science with entertainment to teach and encourage scientific literacy. 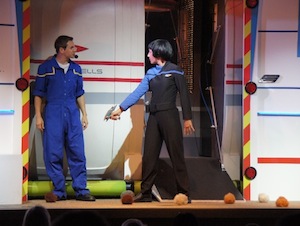 In the show, the audience portrays new Starfleet cadets assembled for the first day at the Starfleet Academy led by its best and brightest. The new cadets will have to learn the intricacies of living and working in space, modern space travel and the latest in communication and technology. As the audience is introduced to the Academy, the Earth comes under attack from a renegade Romulan, leaving the fate of the future itself in the hands of the cadets.

Coming to the Visitor Center later this week is a Star Trek Shuttlecraft Simulator. You set off on an adventure onboard the Starfleet Shuttlecraft Hawking, on a mission to save Earth from Borg assimilation. Your mission is to deliver a captured data node to Tranquility Base on the moon. Resistance is futile, unless of course, you’ve got what it takes to resist being Borg bait.

Visitors can also enter the Launch of a Lifetime Sweepstakes to win a trip to space. Two individual tickets will be drawn for a trip to space aboard the XCOR Aerospace Lynx Vehicle, including space flight training. Prize drawings of merchandise from The Space Shop, admission tickets, tours and Lunch With an Astronaut tickets will be held daily for registered guests. Guests can pick up a Sci-Fi Summer Mission Log. The Mission Log will invite them to journey throughout the Visitor Complex in a quest to find the answers to eight questions covering the last 50 years of U.S. manned space flight and Star Trek. Once completed, answer sheet becomes your contest entry form.

• For our full report from Star Trek: The Exhibition, watch episode 29 of Orlando Attractions Magazine – The Show.

Photos from Star Trek: The Exhibition:

Out of the Loop: Comedian Jimmy Fallon is the new video host of Universal Hollywood’s tram tour

How long will the Star Trek exhibit and Star Trek Live stay at KSC?

We will visit KSC on Sept. 25 and I would love to see both as I’m a Trekkie!

Marc, We’re double checking and will update the post when we hear back, but we think it’s Oct. 31.

Is this included in the cost of the regular admission? I went to the KSC website and they have no details. Thanks!

Yes, it’s included with admission to the Visitor’s Center. The only part I’m not sure about is the Shuttle Simulator.