Out of the Loop: Comedian Jimmy Fallon is the new video host of Universal Hollywood’s tram tour 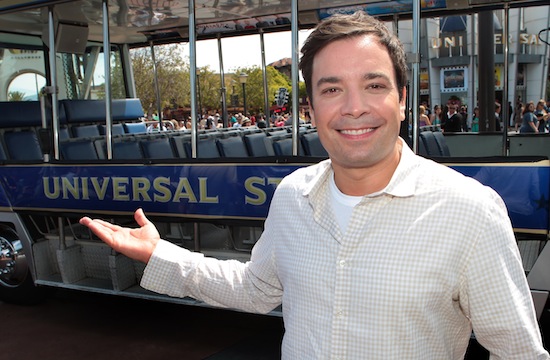 While there will continue to be tour guides aboard that provide live narration during the tour, Fallon will be the “video host”. At certain junctures during the tour, Fallon will appear on high-definition screens that adorn the trams cars. He will introduce a variety of video clips in which he is “inserted” into the action. These scenes will correspond with the particular backlot location in which the tram is travelling to help depict how that setting is used in film production.

“For anyone with any interest in show business, it’s all there: the glamour, the glitz, all the hard work that goes into making a movie or a TV show can be experienced on the Universal Studios Hollywood Tour,” said Fallon. “I’m very happy to be a part of it.”

The famous Universal Studios Hollywood Studio Tour is indeed a classic, having been around in some form for decades. The 45-minute tour is Universal Studios Hollywood’s signature attraction. The attraction is unique in that it takes place in a working studio. The real sets of famous old movies such as the Bates Motel and house from Psycho appear on the tour as well as modern day television sets like Wisteria Street from Desperate Housewives. Although it has been copied, it appears not to have an equal.

The former Universal Orlando tour operated for several years, but was closed in 1995. Disney’s Hollywood Studios Studio Backlot Tour takes place on defunct sets, sets that were never used for live production, and sets created solely for the attraction. Both Orlando tours fall well short of its West Coast counterpart.

The Studio Tour has undergone a sort of renaissance in past years. In 2008, a fire ravaged a large part of the backlot including some classic movie sets. Since that time, many of these areas have been rebuilt and upgraded then reopened. The tram cars themselves were upgraded to include high definition monitors. Under the direction of King Kong director Peter Jackson, King King 360 3-D was added in 2010. Riders don 3D glasses as they enter a large soundstage. When I say large, I mean the largest 3D installation ever produced, measuring the size of 16 conventional theater screens. There, they witness a battle of Kong proportions.

Jimmy Fallon’s addition to the tour is playing now at Universal Studios Hollywood. Here’s a look: