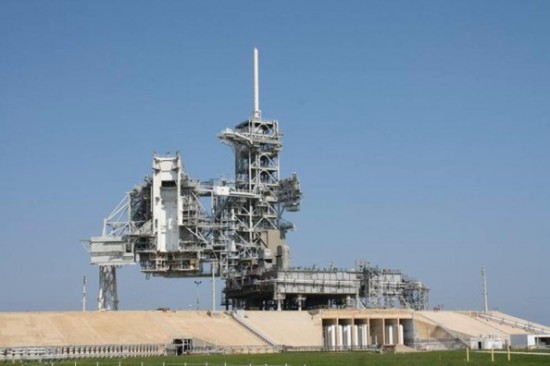 For the first time in the 50-year history of Kennedy Space Center, NASA is now allowing public visitors to tour one of the launch pads from which the space shuttles and Apollo Saturn V moon rockets were launched.

Guided by a knowledgeable space expert, visitors will travel nearly a quarter-mile inside the perimeter security fence to Launch Pad 39-A, from which a majority of space shuttles and all six Apollo missions that landed on the moon were launched. Near the launch pad, visitors will exit the tour bus for photo opportunities, including close views of the 350-foot-high fixed service structure, rotating service structure, propellant storage containers, water tanks that feed the noise suppression system, flame trench and other aspects of the launch pad complex.

“Visitors will travel the same route as astronauts to the launch pad, so they can imagine being an astronaut,” said Bill Moore, chief operating officer of Kennedy Space Center Visitor Complex. “You’re going to be close to where history has been made and will be made in the future with new programs currently under development for space exploration.”

The tour then drives by for views of Launch Pad 39-B, site of launches for the Saturn 1B/Skylab missions and of many space shuttle launches. It is now being modernized for launching NASA’s new Space Launch System heavy-lift rocket for future missions to carry astronauts in the Orion Multi-Purpose Crew Vehicle into deep space. NASA is also preparing Kennedy Space Center to accommodate commercial spacecraft and launch vehicles.

“These are all very rare opportunities that NASA has worked with us to provide to our visitors from Florida, across the United States and overseas,” Moore said. “With exciting new space exploration programs coming to Kennedy Space Center, we may never have access to such historic places like this again.”

The Launch Pad Tour will run through the end of 2012 with a limited number of daily tours. NASA and the Kennedy Space Center Visitor Complex previously opened two other behind-the-scenes tours scheduled to run through year’s end.

The Launch Pad Tour also includes drive-by views of the VAB, the mobile launch platform and one of the crawler transporters that was used to move Apollo rockets and shuttles to the launch pads and is now being updated to move the Space Launch System rocket. The tour culminates at the Apollo/Saturn V Center.

The price is $25 for adults and $19 for children ages 3-11 plus tax, in addition to general admission price. Click here for more information or to purchase tickets.

‘Harry Potter and the Goblet of Fire’...

Believe it or Not! Kim Kardashian borrowed...