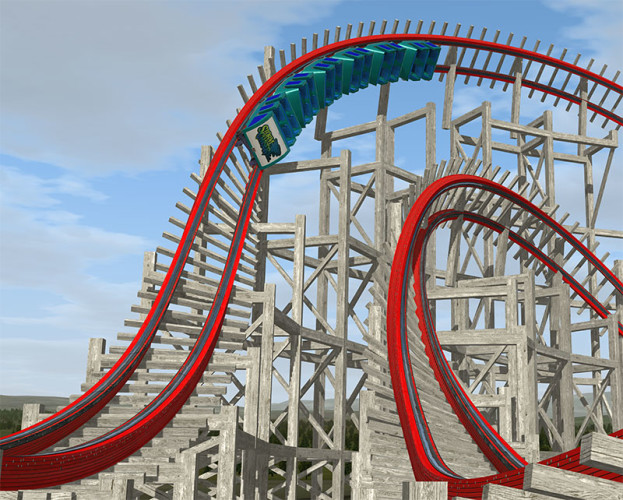 Kentucky Kingdom is about to unleash Storm Chaser, their fifth roller coaster, on Louisville.

Kentucky Kingdom, which ceased operating as a Six Flags park in 2010, is opening on April 30 for its third season since being reborn. The park is marking the completion of its three-year redevelopment plan, with the introduction of its fifth roller coaster – and second new coaster in three years – Storm Chaser.

In discussing the achievement of this milestone, Ed Hart, president and CEO of Kentucky Kingdom, noted, “When we were awarded the lease to reopen and operate Kentucky Kingdom, we promised the state that we would commit $43.5 million over three years. In fact, we have spent a total of $53 million, exceeding our commitment by $10 million.”

The new coaster Storm Chaser packs 12 airtime moments, three inversions, two overbanks, and a ten-story barrel roll drop from the first lift hill – the first such drop on any coaster in the U.S.

“It’s pretty simple,” said Ed Hart, President and CEO. “Families and fun seekers of all ages love to ride a great coaster and will even travel long distances to do so. And we know Storm Chaser fits the bill.”

Storm Chaser will have RMC’s unique and patented IBox track supported by a steel superstructure. In fact, this is RMC’s first steel coaster. It yields a ride that’s smooth as glass, yet also very fast and intense. The IBox track also allows for the addition of thrilling elements not often found on other coasters.

After taking a ride on Storm Chaser, Fred Grubb, president of RMC and inventor of the IBox track, proclaimed, “I know coasters and this is a great coaster!”

Season passes to Kentucky Kingdom are passes are currenlty on sale at the “early bird” price of $59.95. Passes can be purchased on the park’s website or at any Louisville area Kroger store. Visit kentuckykingdom.com for more information.