Land of Oz playground and games open at Epcot 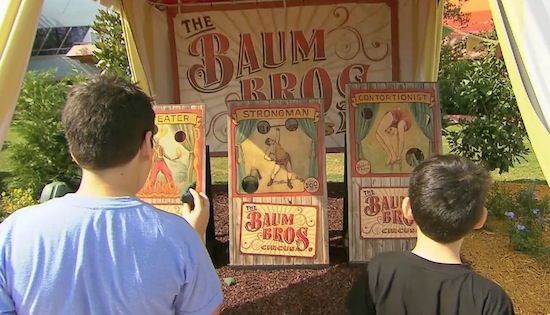 The Land of Oz playground, part of the upcoming Epcot International Flower and Garden Festival (March 6-May 19, 2013) has opened early with some some carnival-type games and more.

The Land of Oz Garden is a new circus-like play area based on the Disney film Oz The Great and Powerful to be released March 8, 2013. The new Land of Oz is located along the Imagination Walkway. The interactive children’s play zone features play systems adorned with giant flowers, midway-style games (similar to last year’s Highland Games in promotion of Disney’s Brave), red-and-white circus-themed tents and the “Oz Movie Garden”. The area also features games, photo opportunities and Oz’s crashed hot-air balloon with lush plants inspired by the movie.

Here’s a look at the new area:

Although the Flower and Garden Festival ends on May 19, it’s possible the new playground and games will stay around longer than that, but they are not expected to be permanent.