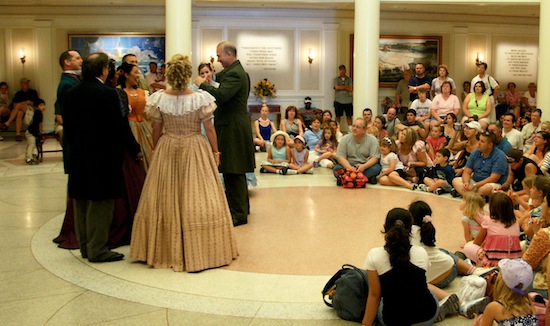 The Voices of Liberty, Disney’s a cappella group that regularly performs in the American Pavilion at Epcot, will put on a special presidential show from Feb. 18 to 24 as part of Disney’s ongoing Limited Time Magic promotion.

The presidential shows will be performed in the America Gardens Theatre at Epcot and will not only include patriotic 8-part harmonies but also quotes from U.S. presidents such as Theodore Roosevelt, Dwight D. Eisenhower, Ronald Reagan and Barack Obama.

Here’s a look at the Voices of Liberty performing in front of Cinderella Castle in a special performance on July 3, 2009:

Voices of Liberty sing in front of Cinderella Castle

Land of Oz playground and games open at Epcot