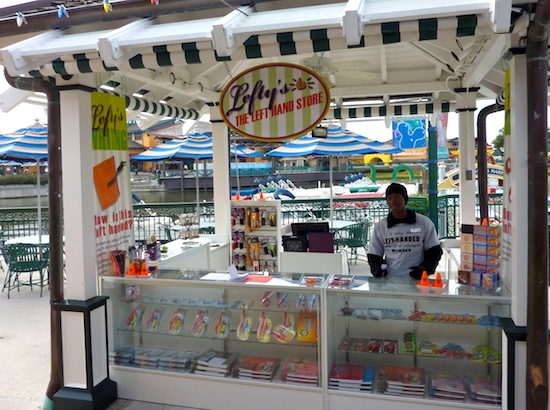 Last week we told you about a new hand art vendor that opened in one of the stands at the Downtown Disney Marketplace. We also mentioned that a wood carving store had closed down, with its stand remaining empty. Well it’s no longer empty. 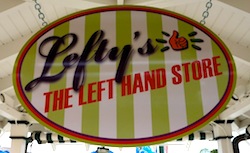 Lefty’s has opened in a stand near the lake, just down from Pooh Corner. They sell items made specifically for left-handed people – things such as scissors, notebooks and other items.

The store is owned by the same company that owns Magnetron (magnet store) in Downtown Disney West Side. Before they moved into their new stand, they had a wall of left-handed merchandise in Magnetron. Those of you who have visited San Francisco may have visited their other store on Pier 39.

Out of the Loop: Six Flags’ Holiday in the Park

Is Ned Flanders involved? Hope he gets his cut somehow.

Hi, I am from the caribbean and currently exploring the establishment of this type of business. I was at Disney’s magic kingdom on Wed. I am sorry I did not research this before so I could have checked out your business. Can you advise if your would be interested in partnering with me as a supplier. I am currently her on vacation and will be leaving this week. can you respond. Perhaps I may be able to visit your booth before I depart. Looking forward to your response. I have an even greater passion fo rit because I have three left handed sons. Looking forward toyour response. Regards, Gillian

Meet characters from Cars 2 during Downtown...