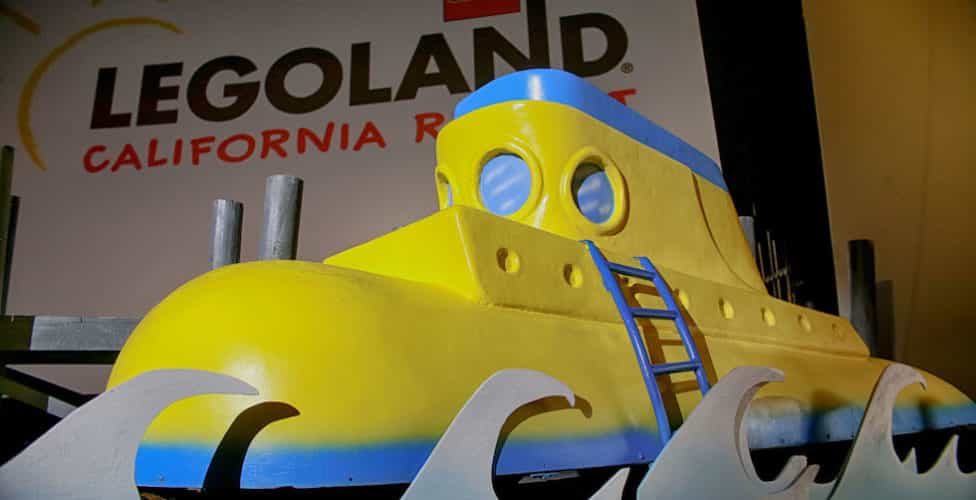 Submarine on stage at the Legoland California press conference. Photo by Sandy Huffaker/Legoland

Legoland California Resort will be going under an exciting expansion, and next year will be one of enormous growth for the park. In addition to a new hotel, they’re adding a new submarine ride and a 4D attraction.

Starting as early as Jan. 12, guests will be able to experience a brand new 4D attraction based off Lego Ninjago characters. The attraction will be called “Lego Ninjago Masters of the 4th Dimension” inside the Lego Showplace Theater. The short film will combine 3D computer animation with 4D real-world effects, allowing guests of Legoland to go on an exciting adventure with some of their favorite ninjas.

Following after will be the resort’s newest hotel, the Legoland Castle Hotel, opening next spring. The Legoland Castle will follow three room themes, Dragons, Knights and Royal Princesses. Booking for the hotel will begin in September.

Opening in the summer of 2018, Legoland will be debuting a brand new attraction called the Lego City Deep Sea Adventure Submarine Ride. It’s an attraction where guests will have the opportunity to board a real submarine and submerge themselves underwater into an ocean habitat. Once submerged, guests can encounter more than 2,000 different types of real life sea animals, including stingrays and breeds of exotic sharks. Joining the attractions’ deep sea life will be Lego Submarine divers, as well as a collection of brightly colored Lego Octopi.

The submarines will be equipped with touchscreen technology at each porthole. These will be help guest interact with the attraction by identifying gems, pearls, Lego gold coins and more throughout the journey. This new feature will allow guests to assist the Lego Scuba diving team on their mission.

“I’m extremely excited for our guests to experience LEGO City Deep Sea Adventure submarine ride,” said Ronchetti. “For the first time in the United States, we are bringing our guests onboard a real submarine where they’ll go underwater to discover a truly amazing world filled with more than 2,000 different real sea animals, including several species of stingrays and a variety of exotic sharks.”

This immersive new attraction will be Merlin Entertainment’s single largest investment in any Legoland theme park. Up to 12 guests will be able to board a single submarine, with a total of eight submarine ride vehicles based off of the Lego City Deep Sea Adventure line of toys. The ride is estimated to open shortly after the Legoland Castle Hotel.

The Lego City Deep Sea Adventure Submarine Ride, and Lego Ninjago Masters of the 4th Dimension will both be included with price of admission to the Legoland California Resort.

Here’s a look at the announcement and concept for the submarine ride:

I applaud Legoland CA for building a unique ride like this, the problem is it’s another low-capacity attraction, which is a problem with many of its rides. For anyone who has stood in line for Disneyland’s Nemo attraction or the old 20,000 Leagues Under the Sea, you have been there before.

Its just 20000 leagues under the sea without moving and without water. Just looking at lcd panel. Boring and cheap.

Inside Look returns to SeaWorld Orlando for...